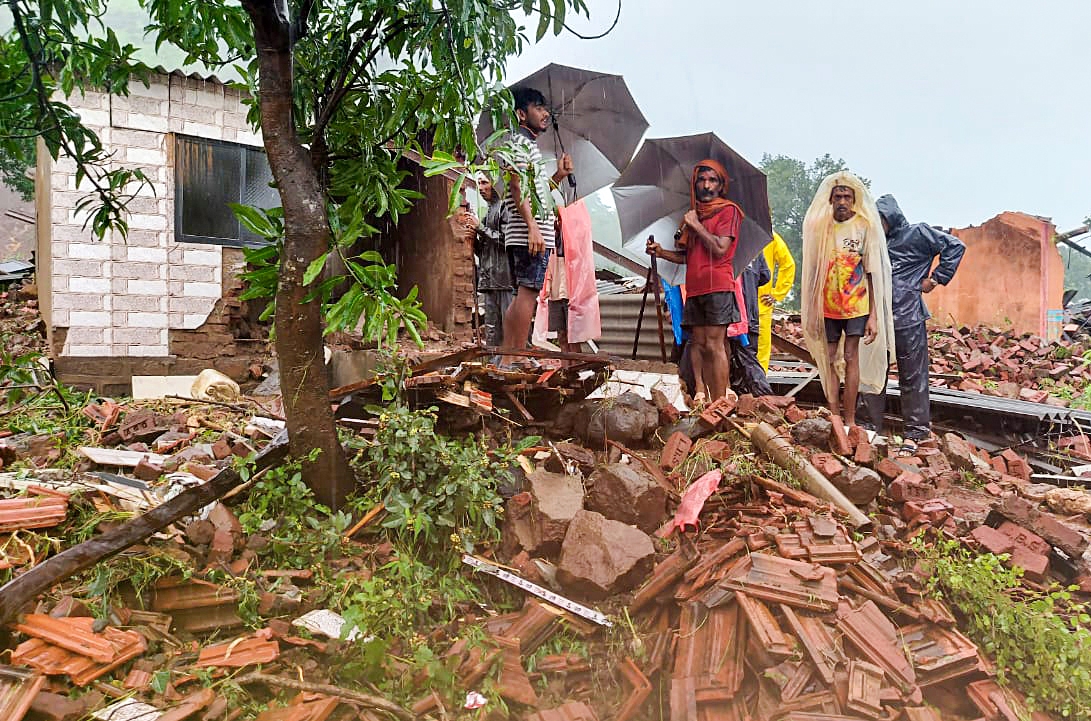 Maharashtra, July 23 (ANI): People gather at the premises of a damaged house due to incessant rains, in Raigad on Friday. (ANI Photo) | ANI

At least 44 people have lost their lives in two different incidents of landslides in the Raigad district of Maharashtra, Raigad District Collector Nidhi Chaudhary told news agency ANI on Friday evening. More than 25 people are still trapped under the debris, she added.

National Disaster Response Force (NDRF) NDRF Deputy Inspector General Mohsen Shahedi said that 18 teams of the NDRF are currently carrying out rescue and relief operations in Raigad and eight additional teams are being airlifted from Odisha considering the situation and the need for more relief operations.

"Landslides took place in Raigad district due to excessive rain in which about 32 houses had collapsed. The rescue operation is going on. NDRF teams are there," Shahedi told ANI while giving a brief detail about the flood in Maharashtra and other places.

The landslide in Raigad district took place near Talai village in Mahad tehsil on Thursday evening.

Raigad district collector Nidhi Choudhary said the landslide incident was reported late on Thursday evening. "But since the roads leading to the spot were blocked due to the floods and the sludge, the rescue teams found it difficult to reach the site," she said.

"The operation resumed today morning and the bodies were recovered by afternoon," she added.

Meanwhile, Prime Minister Narendra Modi expressed condolences over the loss of lives due to landslides in Maharashtra's Raigad and announced ex gratia of Rs 2 lakh each for the next of kin of the deceased.

In a tweet, PM Modi wrote, "Anguished by the loss of lives due to a landslide in Raigad, Maharashtra. My condolences to the bereaved families. I wish the injured a speedy recovery. The situation in Maharashtra due to heavy rains is being closely monitored and assistance is being provided to the affected." According to the Prime Minister's Office (PMO), Rs 50,000 will be provided to the injured persons due to the landslide.

"PM @narendramodi has announced an ex gratia of Rs 2 lakh each from PMNRF for the next of kin of those who lost their lives due to a landslide in Raigad, Maharashtra. Rs 50,000 would be given to the injured", the PMO tweeted.

Maharashtra Chief Minister Uddhav Thackeray also announced ex-gratia of 5 lakh each for the kin of those who lost their lives in the landslides caused by torrential rainfall in various parts of the state.

According to the Chief Minister's Office (CMO), the state will also incur the costs of treatment for those injured.

"CM Uddhav Balasaheb Thackeray has announced Rs 5 lakh each for the kin of those who lost their lives in the landslides caused by torrential rainfall. The state will also incur the costs of treatment for those injured," CMO wrote in a tweet.