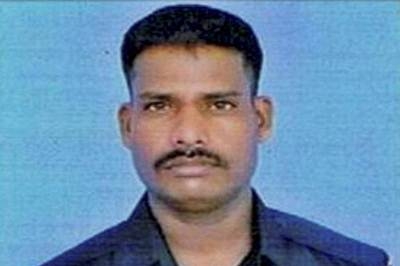 New Delhi: File photo of Lance Naik Hanumanthappa who is critical and on a ventilator at the Armys Research & Referral Hospital in New Delhi on Tuesday. Hanumanthappa was miraculously found alive after remaining buried under huge mass of snow for six days at Siachen Glacier. PTI Photo (PTI2_9_2016_000079B) |

Mumbai: Bollywood celebrities like Lata Mangeshkar, Anupam and Kirron Kher, Rishi Kapoor among others mourned soldier Lance Naik Hanumanthappa Koppad’s death on Thursday. While actor Anupam Kher saluted him for his sacrifice, Sunny Deol says that he will always be there in his heart.

Hanumanthappa was dug out alive from snow and ice in which he was buried for six days in the inhospitable Siachen glacier.

Saluting his bravery, B-Town took to micro-blogging website Twitter and offered their condolences for Koppad who died at Army Hospital (Research and Referral) in Delhi, where he battled for life for two days.

Here is what they posted:

Kirron Kher: I salute the bravery of LN Hanamanthappa. It is with profound grief that I join the nation in paying homage to him. It is because of our brave soldiers that we sleep easy. We must always remember that! Rest In Peace Braveheart #Hanumanthappa. Salute to the soldiers who sacrifice their lives for our safety.

Anupam Kher: Heartbreakingly Sad to know about #SiachenHero #Hanumanthappa’s demise. We Salute and Thankyou for your sacrifice. You’ll always be our HERO.

Farhan Akhtar: Saddened to read that Lance Naik Hanumanthappa passed away. RIP. Condolences to his family.

Atul Kasbekar: Genuinely crushed at this news. Just not fair after what he went thru. Jai Hind Sir.

Aftab Shivdasani: RIP Lance Naik Hanamanthappa. Braveheart and protector of our nation. Condolences and prayers for his family.

Sophie Choudry: Heartbreaking to know about the passing of #Hanumanthappa. A true patriot and braveheart. Thankyou for your courage. RIP. #Siachen.