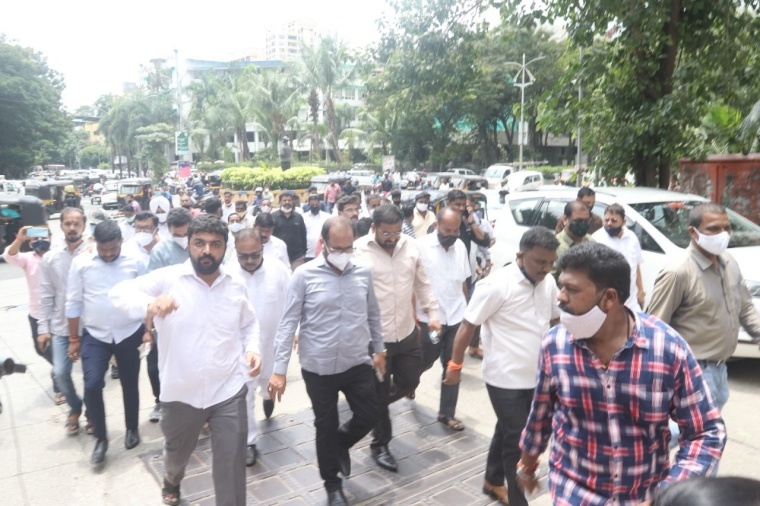 In Thane city, Naresh Mhaske, Mayor of Thane Municipal Corporation and Shiv Sena corporator carried out a protest along with Shiv Sena party members, which was stopped by the police team. The protest saw slogans against Rane and demand for his arrest after an FIR was registered with the Naupada police station in Thane.

Similarly, ex-corporator of Shiv-sena Mahesh Gaikwad along with party members protested at Kalyan east area. The party members put a shoe and slippers garland on the refugee of Rane. Also, Rajesh More, Dombivli city president of Shiv-sena stage of protest in Dombivli by giving slogan of 'Khobdi Chor' and releasing chicken on the road. Also, few Shiv-sainiks protest in front of Bharatiya Janata Party office at Ahilyadevi Holkar chowk.

However, Ulhasnagar had seen a different protest where Shiv-sena party members attacked a Bharatiya Janata Party corporator by putting ink on his face. The BJP corporator, Pradeep Ramchandani from Ulhasnagar was caught in front of the Ulhasnagar Municipal Corporation gate. He was caught by Yuva-sena members Bala Shrikhande, Dyneshwar Marshale, Mahendra Patil, Vinod Salekar and 7 to 8 others. They put ink on his face. Pradeep's son Rohit also tried to save his father but was unsuccessful. Pradeep was then admitted by BJP members and senior leaders in Central hospital for treatment. However, Rajendra Kote, police inspector, Central police station reached the spot for investigation.

Pradeep Ramchandani claims, "He used to regularly post on social-networking sites the illegal work of Shiv-sena in Ulhasnagar. This was a revenge or rivalry over the post," addes Ramchandani.