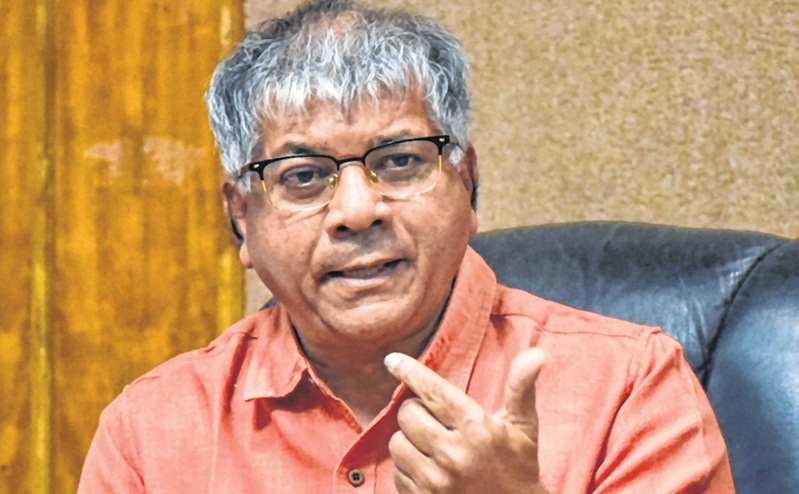 Nagpur: Bharipa Bahujan Mahasangh leader Prakash Ambedkar on Saturday said the Congress will have to come up with an “agenda” to “rein in the RSS” before seat-sharing talks could take place between the two parties. Addressing a press conference in Ravi Bhavan here, Ambedkar alleged that the Rashtriya Swayamsevak Sangh does not believe in the Constitution and was running a parallel government. While one government is being headed by the President of India as per the Constitution, the other was an unconstitutional one helmed by the RSS, Ambedkar claimed. He said the Congress must come with an agenda to ensure the RSS is brought within the “ambit” of the Constitution. Speaking on the police probe against activist Anand Teltumbde, the BBM leader claimed the “5000 page FIR” filed in the case did not have any evidence that would stand under the Evidence Act.

“They have filed a 5000-page FIR having no evidence that can stand under the Evidence Act. The documents presented by them (police) as part of the FIR does not have his name anywhere, only the name Anand is mentioned. On this basis, they have made Anand Teltumbde an accused in the case,” Ambedkar claimed.

He said an international university mentioned as “a centre of terrorist activities” in the 5000-page FIR could create “cracks” in the relationship between India, the United States and France. He further alleged the government wanted to create a rift between the Maratha and OBC communities which the Elgar Parishad, held by Dalit organisations on December 31, 2017, prevented.

Ambedkar claimed those associated with the Elgar Parishad started being viewed as Naxal associates by the government after this (creation of rift being prevented). Teltumbde is an accused in the Elgar Parishad-Koregaon Bhima case which was filed following clashes in Pune on January 1 last year. On February 5 this year, the Pune police had told the Bombay High Court that it will not arrest Teltumbde till February 12 midnight. The court was hearing an application filed by Teltumbde seeking anticipatory bail in the case. He was booked on several charges, including sections under the Unlawful Activities Prevention Act (UAPA).