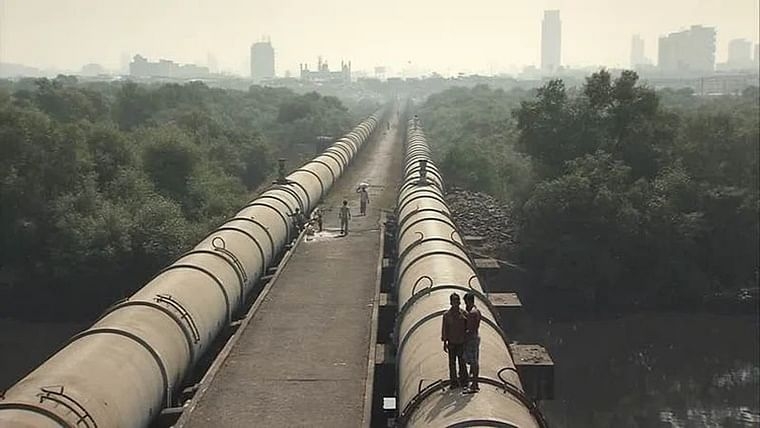 A century-old water pipeline had burst during the intervening night of Tuesday and Wednesday leading to water scarcity throughout the day at the Bandra, Santacruz, and Khar areas of suburban Mumbai.

Civic officials informed, the pipeline serves as the main water supply network, which supplies water from the Tansa Lake to the residential areas of Bandra and Khar. Due to the leakage, water supply to the entire H-West ward (Bandra, Khar and Santacruz) was adversely affected as the water supply couldn't be restored unless the leakage was repaired.

Officials of BMC's hydraulic department were deployed at the spot to initiate repair works and it took nearly 12 hours for the civic officials to repair the leakage.

"The pipeline is more than 100-years-old, the burst might have caused due to fluctuating water pressure" a senior engineer of BMC's hydraulic department told FPJ.

The officials informed that repair works were completed around 2 pm on Wednesday afternoon and the water supply would be restored by evening.

"We had to turn off the valve to suspend water flow throughout the pipeline or else more water would have got wasted. The leakage repairs are completed and normal water supply would be restored by Wednesday evening," the official added.

Local Congress corporator Asif Zakaria stated those living in the H-West ward had to bear the brunt on Wednesday as many residential areas of Bandra didn't get water.

"The pipeline which had burst used to be the main boosting line of entire H-West ward. Many areas didn't get water on the morning while some received water but pressure was very low," Zakaria told FPJ.

Meanwhile, local civic activists and residents have blamed the BMC for poor maintenance of water pipelines. This is the second water leakage incident to have happened in the past week. Earlier on Friday, a water pipeline had burst near Portuguese Church in Bandra which also led to water wastage of thousands of litres.

"It's high time the civic body carries out pipeline audits at least once a year. This is the second pipeline burst incident in last one week, most of these pipelines are more than 100 years old. The BMC needs to adapt backup pipeline channels now," said Samit Sinha, a social worker and resident at Bandra.

"The BMC needs to install an emergency valve to control water flow at every pipeline or else thousand of litres of water will keep getting wasted like this," said another resident requesting anonymity.