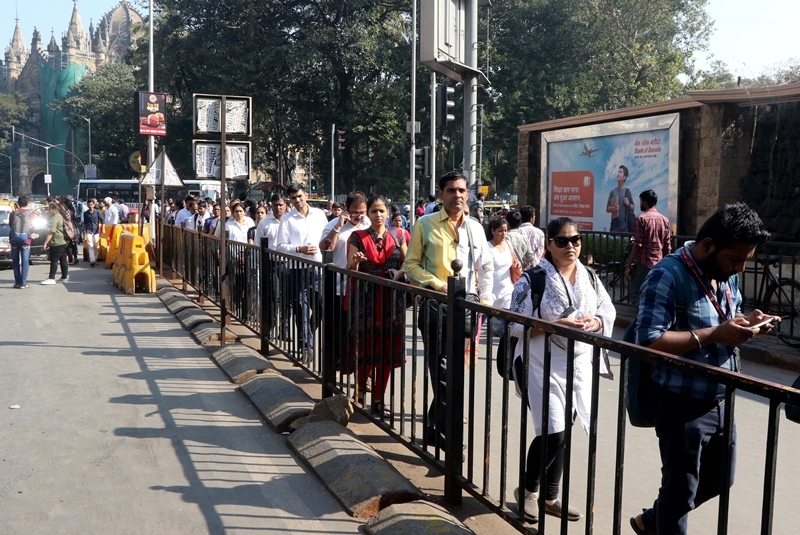 Mumbai: People wait for Taxi at Chattrapati Maharaj Shivaji Terminus due to indefinite strike by BEST employees, in Mumbai on Tuesday, January 08, 2019. (Photo by Bhushan Koyande) |

Mumbai: Opposition leaders on Wednesday walked out of the standing committee meeting at the Brihanmumbai Municipal Corporation (BMC) over ruling party Shiv Sena’s refusal to discuss the Brihanmumbai Electricity Supply and Transport (BEST) strike. Instead of discussing the ongoing strike, Sena corporators and the chairman of the standing committee, Yashwant Jadhav, carried on as though it was business as usual.

In protest, the entire opposition staged a walkout, alleging the Sena was least interested in resolving issues related to the citizens of Mumbai. According to Rais Shaikh, corporator of the Samajwadi Party, “This is not the way proceedings are undertaken when citizens are suffering. The standing committee should discuss the issue and come to a possible solution as early as possible,” he said.

The leader of the opposition and Congress party corporator Ravi Raja opined that he had lost faith in the BMC administration. “We wanted to enquire on the BEST and the BMC budget merger proposal, but the Shiv Sena is least bothered about BEST employees and citizens of Mumbai.” The proposal to merge the BEST budget with that of the BMC was passed a year ago, but there was no progress since then.

Rakhi Jadhav, a corporator of the Nationalist Congress Party, said, “This is an attempt to curtail the voice of democracy”. Jadhav had earlier issued a notice to the chairman of standing committee regarding the discussion. Reacting to this, Jadhav, the standing committee chairman and a Sena corporator said, “There are certain norms of the House and the notice should have been issued at least 30 minutes earlier. This is not the way the House functions,” he added. Even as this political slugfest goes on, the strike called by the coalition of the BEST employee unions has entered the third day.