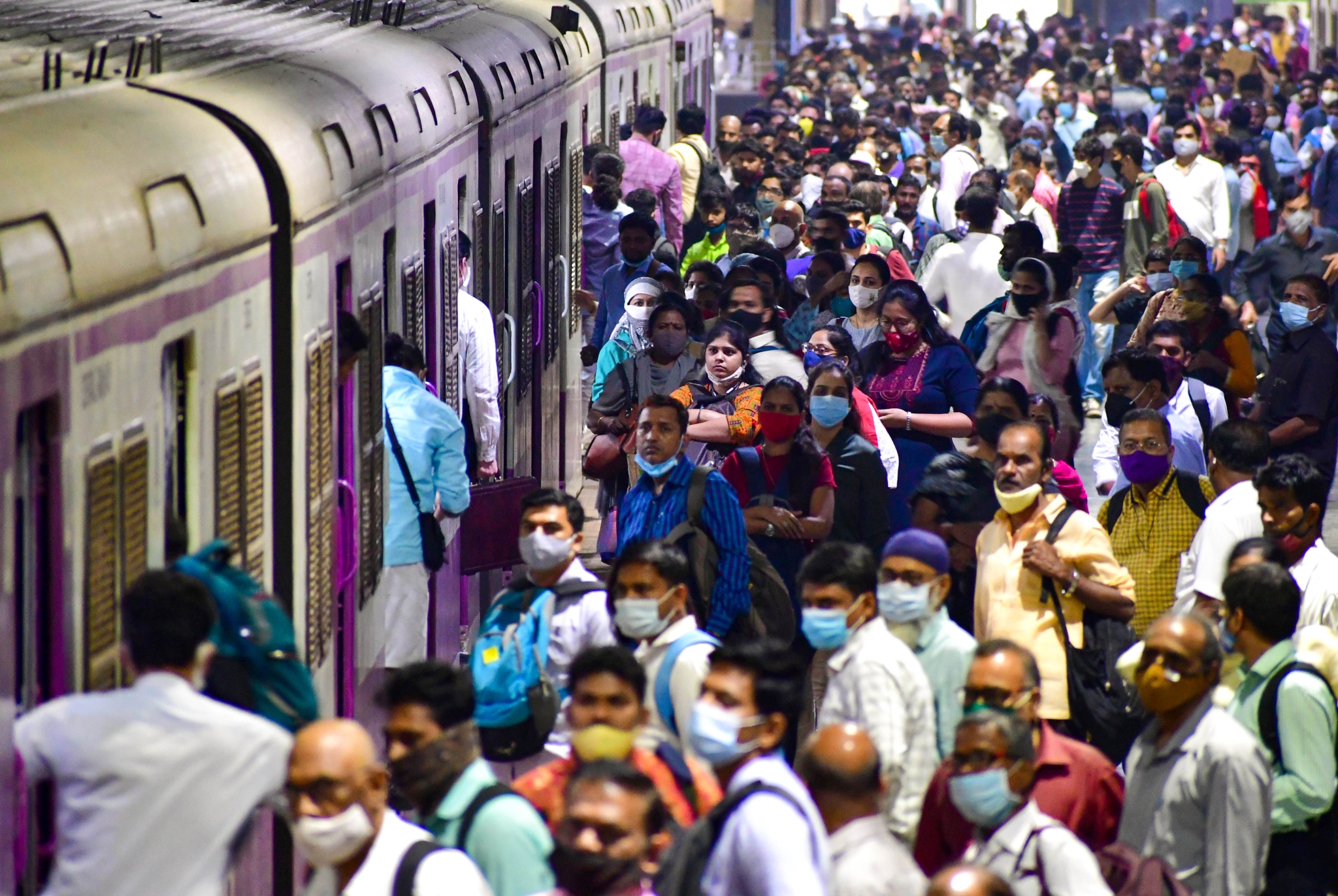 Mumbai: A crowded platform at Chhatrapati Shivaji Maharaj Terminus railway station amid concern over rising cases of Omicron variant of COVID-19 across the country, in Mumbai, Wednesday, December 29, 2021. | (PTI Photo)

Maharashtra reported 198 cases of Omicron variant on Thursday, of which 190 cases are from Mumbai, followed by four in Thane and one each in Satara, Nanded, Pune and Pimpri Chinchwad, as per the report revealed by the National Institute of Virology (NIV) Pune. Meanwhile, the Omicron variant has been found in almost 37.5 per cent of random samples taken by the Brihanmumbai Municipal Corporation for whole-genome sequencing.

However, one non-covid death has also been reported in Pimpri Chinchwad who had been infected with the Omicron virus, as per the NIV report.

Health officials from the state health department said a 52-year-old man with a travel history to Nigeria died of a heart attack in Pimpri Chinchwad on December 28. The death of the patient is due to non-Covid reasons.

"The death of this patient was due to non-covid reasons. Coincidentally, today's National Institute of Virology's report reveals that he was infected with the Omicron virus. The patient had been admitted to the Pimpri Chinchwad Municipal Corporation's Yashwantrao Chavan Hospital. He also had diabetes for the last 13 years,” he said.

The civic body had collected 375 samples between December 21 and 22 for genome sequencing, of which 141 samples have been infected with the Omicron variant. However, none of these cases had any history of travel. “As per the genome report it clearly shows that the Omicron has spread in the community, but it will be early to start its community transmission until we get all the details,” said Suresh Kakani, Additional Municipal Commissioner.

Kakani further said that of the 141 Omicron positives, 93 are fully vaccinated, and three have taken one dose. Moreover, seven have moderate symptoms, 39 are mildly symptomatic, and 95 are asymptomatic and only seven cases are hospitalized and are moderately symptomatic, not on oxygen.

Meanwhile, the total number of Omicron cases in Maharashtra has increased to 450, of which 327 are from Mumbai, followed by 26 in Pimpri Chinchwad, 30 in Pune, 12 in Thane, seven each in Navi Mumbai, Panvel and Kalyan Dombivali, six each in Nagpur and Satara, five in Osmanabad, three each in Vasai Virar and Nanded, two each in Aurangabad, Buldhana, Bhiwandi Nizampur and one each in Latur, Ahmednagar, Akola, Mira Bhayandar, Kolhapur.

Dr Pradeep Vyas, additional chief secretary (health), said these cases don't necessarily confirm that Omicron is circulating in the community. "The government of India is doing community surveillance nationally. Mumbai and Pune have been selected, and all positive samples will be sent for sequencing," he said.