The local police are regularly patrolling the Yeoor area to see that all Covid-19 guidelines and restrictions imposed by the government are being followed by the revellers.
Faisal Tandel 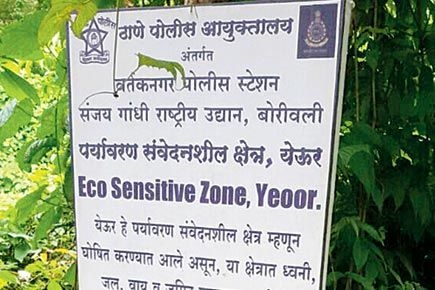 With revellers going to celebrate the Christmas and New Years weekend at Yeoor Hills in Thane, the Thane police and forest officials are keeping a watch on the entry point to check that no anti-social activity takes place during the weekend.

According to the police, the flow of visitors at Yeoor Hills increases substantially during Christmas and New Year. Residents who go for morning walks across the hills claim to find numerous liquor bottles after the New Year celebrations.

Dr Vinaykumar Rathod, Deputy Commissioner of Police, Zone 5 confirmed the action against the revellers and said, "We will ensure that regular police band-o-bast (arrangement) and Naka Bandi's will be placed at the entrance point gate of the Sanjay Gandhi National Park."

Rathod further explained that the local police are regularly patrolling the Yeoor area to see that all Covid-19 guidelines and restrictions imposed by the government are being followed by the revellers.

"We will see that the hotels and restaurants in Yeoor follow the guidelines as per the timing. Also, the rules to allow 50 percent of customers are allowed. Similarly, no anti-social activities are to be carried out during the weekend. Those found with any activity action will be taken against them," he added.

Rathod said with the help of Thane traffic police, a drunk and drive operation will be carried out in the area to take action against motorists found driving in the influence of alcohol.

A team of forest officials along with local police will see that no revellers enter the hills with liquor or create any nuisance at the public place.

Sources from the police and forest officials say many of Mumbai and Thane revellers come to the party in their personal bungalows.

The authorities claim they can't take action against personal parties at home. But if they find any violation like playing loud music, then action will be taken accordingly.