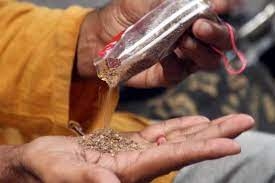 Taloja police seized banned gutkha worth Rs 13 lakh from two abandoned vehicles in Pendhar in Taloja on Thursday. Police suspect that gutkha was brought in for retail distribution and the vehicles were abandoned in a secluded area to divert administration’s attention.

On July 26 morning, the Taloja police received information that gutkha was brought in its jurisdiction in two vehicles. Based on information, the police conducted search of the abandoned vehicles and found gutkha packed in several sacks.

According to police, the Gutkha was kept in one truck and a small tempo. “The total gutkha seized worth Rs 12.96 lakhs,” said Chavan, adding that the two abandoned vehicles have also been seized worth around Rs 9 lakhs.

A case has been registered against the driver and owner of the two vehicles section 188, 272, 273, 328, and 34 of IPC, under relevant sections of the Food Safety and Standards Regulation 2011.

“We started the searching the driver and the owner of the truck for carrying the banned product,” said Chavan, adding that Navi Mumbai police does not tolerate storing and sales of banned drugs in the city.