Traders at the APMC say that the dry spell for around a fortnight helped farmers to bring vegetables to the market.

“There is around 30 percent rise in the arrival and this has brought down prices of most of the vegetables,” said an administrative official from the APMC, Vashi.

The price of cauliflower had reached Rs 100 per kg in July's third week and now it has come down to Rs 60 per kg. Even drumsticks are now available at Rs 80 per kg.

Among leafy vegetables, a bunch of spinach is available between Rs 10 to Rs 15 in the retail market.

According to traders, during the monsoon period, the supply of vegetables keeps fluctuating. “The supply is not constant during monsoon as heavy rainfall prevents arrival from remote areas,” said Viren Mhatre, a trader from Vashi APMC.

The APMC Mumbai receives most of the vegetables from Nasik, Pune, Kolhapur, Sangli and other places in western Maharashtra and Karnataka. During July, due to heavy rainfall in these areas, the supply dipped and prices started soaring. 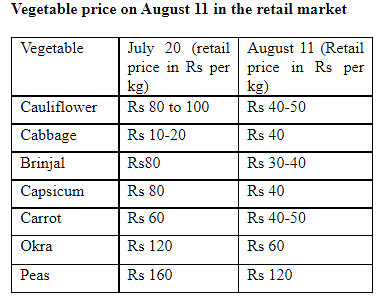