HomeMumbaiMumbai updates: 19-year-old biker dies after he was thrown off the Bandra Reclamation U-bridge due to overspeeding

Mumbai updates: 19-year-old biker dies after he was thrown off the Bandra Reclamation U-bridge due to overspeeding

Mumbai updates: 19-year-old biker dies after he was thrown off the Bandra Reclamation U-bridge due to overspeeding |
Follow us on

Mumbai updates: 19-year-old biker dies after he was thrown off the Bandra Reclamation U-bridge due to overspeeding

Maharashtra | A 19-year-old biker died after he was thrown off the Bandra Reclamation U-bridge. Due to overspeeding, he lost control. Bandra police have registered a case of accidental death as the biker was alone: Mumbai Police

Mumbai: Shiv Sena MP Sanjay Raut on Sunday claimed Maharashtra's political atmosphere has become polluted where many people are out to "destroy" each other.Raut said he realised this again after coming out of jail on November 9.

Thane: Former Maharashtra minister Jitendra Awhad, who was arrested two days back in a case of disrupting a show of Marathi film "Har Har Mahadev" at a theatre here, has said distorting history will give a wrong message to the future generation.

A 57-year-old employee of the Brihanmumbai Municipal Corporation (BMC) was caught while allegedly accepting a bribe of Rs 50 lakh to stop action against a company for illegal construction, police said on Saturday.

He was subsequently arrested under the Prevention of Corruption Act.

Mumbai designer abducted by 4 for failing to pay money for assignment; rescued in Guj

Mumbai Police rescued a 43-year-old designer from four persons who abducted him and took him to Gujarat after he failed to pay them Rs 6 lakh for a stitching assignment done by them, an official said on Saturday.

The designer was abducted from suburban Malad on November 3 and taken to Vapi in an SUV, police said.

Accordingly, the Gujarat Police was alerted. A crime branch team of Vapi Police intercepted the car and rescued the victim and took accused persons in custody on November 3, he said.

Bal Thackeray's memorial to be completed by 2023-end: Uddhav

The construction of the memorial of Shiv Sena founder Bal Thackeray in the city will be completed by the end of 2023, his son and Sena president Uddhav Thackeray said on Saturday.

The memorial is coming up at the Mayor's bungalow at Shivaji Park in central Mumbai.

As much as 58 per cent of the work is complete, Uddhav Thackeray told reporters here.

The Sena's history and Bal Thackeray's speeches will the highlights of the memorial, he said.

A gang allegedly involved in several house-breaking thefts was busted in Latur in Maharashtra, and gold and silver ornaments worth Rs 2.68 lakh were recovered, a police official said on Saturday.

The three accused were held from Sugav village in Chakur tehsil after Crime Branch teams were formed to solve HBT cases, he said.

A hunt is on for more members of the gang by teams from Shivaji Nagar and MIDC police stations, the official added.

Thane: One held for killing man who intervened in fight

One person was arrested for allegedly killing a man who intervened to break up a fight in Maharashtra's Thane district, a police official said on Saturday.

The accused and one more person were fighting in a room in a slum colony in Kalwa on Friday afternoon, and victim Omprakash Tiwari (42) was stabbed when he intervened, Inspector YJ Shirsat said.

"The accused had first stabbed the man he was having an argument with. This man, identified as Suraj Sheikh, is hospitalised. The accused then stabbed Tiwari, who died on the spot. The accused was held late Friday night," the Kalwa police station official said.

Shiv Sena (UBT) President Uddhav Thackeray on Saturday asked all his cadres to prepare for the possibility of a mid-term Assembly elections in Maharashtra anytime.

"There can be mid-term polls in Maharashtra for which we must be prepared at every level," Thackeray informed a closed-door meeting of Assembly segment-level party workers, asking them to get cracking.

Sena (UBT) chief spokesperson and MP Arvind Sawant said, "An unconstitutional government is in place in the state. Whenever the Supreme Court decision comes, you know what will be the fate of this government."

Nationalist Congress Party (NCP) chief Sharad Pawar on Saturday said BJP has been rejected in most of the country and targeted Prime Minister Narendra Modi over the "lack" of the vision for "inclusive development".

Pawar, who has been undergoing treatment in a Mumbai hospital since the last few days, flew to Shirdi from Mumbai with doctors and addressed the party convention briefly.

He said the Bharatiya Janata Party (BJP) has been rejected in most of the country, except in few states, while in other states the saffron party has formed governments by "misusing" Central probe agencies.

Kasa police file a case u/s 304(A), 279, 336, 338 in death case of former Tata Sons Chairman Cyrus Mistry, against Anahita Pandole, who was driving during accident

Fire at Dombivali building; 10 people injured and admitted to hospital 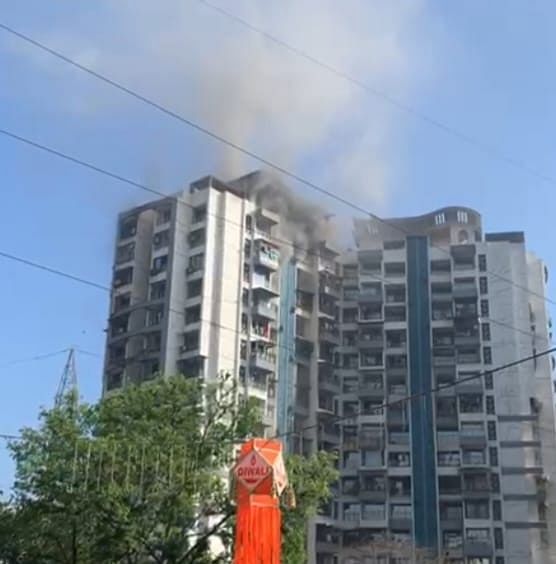 "Our government has decided to boost the court infrastructure. A long-pending concern of our HC Chief Justice Dipankar Datta of allotting a plot for the new complex of the high court is almost resolved. All legal issues pertaining to the land in Bandra, Mumbai for the new complex (have been resolved). Soon a land parcel will be allotted," the deputy chief minister said.

A fire broke out in the South Mumbai shopping avenue Fashion Street on Saturday afternoon. The fire was reported around 1.02 pm; no injuries have been reported, said officials

Co-convenor BJP Mumbai - IT and SM Cell Pallavi CT shared a video of motorist driving from the opposite side at Sakinaka junction. She alleged that this is common practice in the region. Watch video here

Shocking attitude to wrong side driving

Watch till the end

See what he tries to do

What does he intend to do by photographing these people?

Air Quality Index of the most significant places across the city

Train 18030 Shalimar to LTT detaining at Nashik Road Railway station due to fire noticed in parcel van (luggage compartment. No paseengers in this bogie). Fire tenders attending and extinguishing fire. Fire is under control now. No injury to any Passenger/any person: CPRO Central Railway

Train 18030 Shalimar to LTT detaining at Nashik Road Railway station due to fire noticed in parcel van (luggage compartment. No paseengers in this bogie). Fire tenders attending and extinguishing fire. Fire is under control now. No injury to any Passenger/any person (1/1).

Lonikand police station has registered a case against eight people; including one doctor, for running a hospital illegally in Wagholi’s Siddharth nagar. All of the accused have been booked under various sections.

The case came to light when Narendra Anand Waghmare, a lawyer by profession and a resident of Wagholi, filed a complaint at Lonikand Police Station recently against New Matoshree Multi specialist Hospital in Wagholi.

As per sources from the police department, the hospital was run in collaboration with Dr Shashikant Nikam and Dr Vidyanand Bhillare and the accused opened an unofficial hospital named New Matoshree Multi Specialist in Wagholi area in the year 2014.

The opening of the first phase of metro lines between D N Nagar and Dahisar, as well as the Andheri Western Express Highway to Dahisar, by the Mumbai Metropolitan Region Development Authority (MMRDA), may also help in providing partial respite to the commuters.

Primarily, those who have been commuting in other public transport modes will make the switch to metro rail. Only a few people driving down in their cars, some hailing cabs on online platforms, and auto rickshaws will prefer the faster route to cross from west to east and vice versa.

Gopal Krishna Gokhale Bridge, Andheri has been declared unsafe for public use by @mybmc . Hence, in view of public safety, it will be closed for vehicular & pedestrian traffic from 7th Nov, 2022 till further notice. For alternate routes see below notification.