The accused duo has been apprehended and booked under relevant sections of the Indian Penal Code and Arms Act for the offence.
Priyanka Navalkar 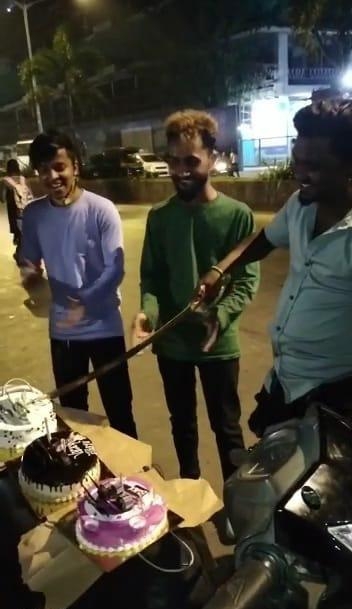 The Kandivali Police have arrested two men for flouting the COVID-19 norms by allegedly arranging an unlawful assembly of people for birthday celebrations on January 3 night and cutting the cake with a sword. The video and photos of the incident went viral on the social media, following which police learnt about it and registered a case. The accused duo has been apprehended and booked under relevant sections of the Indian Penal Code and Arms Act for the offence.

According to police sources, the incident occurred at 11pm on Monday, when the arrested duo, identified as Seelam Barsam Subramanian, 22 and Qausar Major Khan, 23 were seen celebrating the birthday outside the Raghuleela Mall near Borsa Pada in Kandivali (W). The duo had called their friends for the celebration despite there being a ban on assembly of fine or more people after 9pm in the light of rise in COVID-19 cases with the latest Omicron variant. Moreover, the duo were seen cutting the cake with a 31.5 inch sword, as seen in the video that went viral, which spread fear and unrest among people.

Soon after learning of the incident, taking cognisance, the Kandivali Police registered a case and traced the accused duo. They were then apprehended and booked under relevant sections of the Indian Penal Code for for disobedience of orders promulgated by a public servant (section 188), negligent act likely to spread infection (section 269), malignant act (section 270) and common intention (section 34), along with relevant sections of Arms Act.

The duo was produced before a local magistrate court for their offence and remanded in police custody for further probe. Meanwhile, police have also seized the sword used by the accused and investigating the matter further.