However, MLA refuted the allegation of not signing the Mantralaya entry register, abusing cop

Balasahebanchi Shiv Sena MLA Mr Santosh Bangar has been accused of trying to enter the premises of Mantralaya along with his supporters without making the mandatory entry in the police register at the gate and allegedly abusing and threatening the police at the entrance. A Mantralaya official said no complaint was filed with Marine Drive police station, though a report on the incident was submitted to the office of the Director General of Police as well the state Home department.

As per officials, the incident happened on Thursday afternoon and Bangar allegedly even used an expletive when he was asked to sign the register by police personnel posted at the gate. When Mr Bangar was entering the Mantralaya with his 27 supporters, the police deployed at the entrance stopped them and told the MLA that the entry without passes for all 27 persons won’t be possible. However, the MLA allegedly threatened the police on duty.

The MLA from Kalamnuri in Hingoli district was allowed to enter after one of the persons in his entourage signed the register after filling in visitor details, they added.

The Chief Minister Mr Eknath Shinde and Deputy Chief Minister Mr Devendra Fadnavis took a serious note of the incident and they will soon issue instructions to the MLAs from Shinde camp and BJP not to enter into war of words with the police instead of treating them politely.

Meanwhile speaking to a news channel, Bangar said the allegations were baseless.

‘’We were stopped at the (Mantralaya) gate by police personnel there. One of my supporters told him I was an MLA, after which he greeted me and I returned the gesture. I also told him my personal assistant would fill in the entry details," he claimed.

He said police may have made an entry of the incident in their diary thinking he would complain being an MLA. 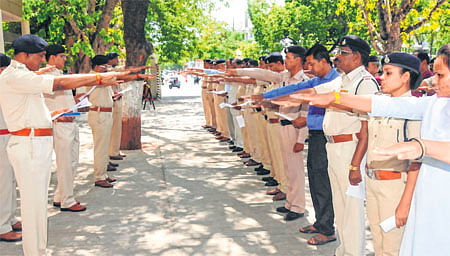