Mumbai: Sachin Tendulkar thanks traffic cop for going beyond duty to save his friend's life

When she was undergoing treatment, Tendulkar came to see her and after learning about the traffic cop and his efforts, he thanked him for saving his friend's life
Sachin Gaad 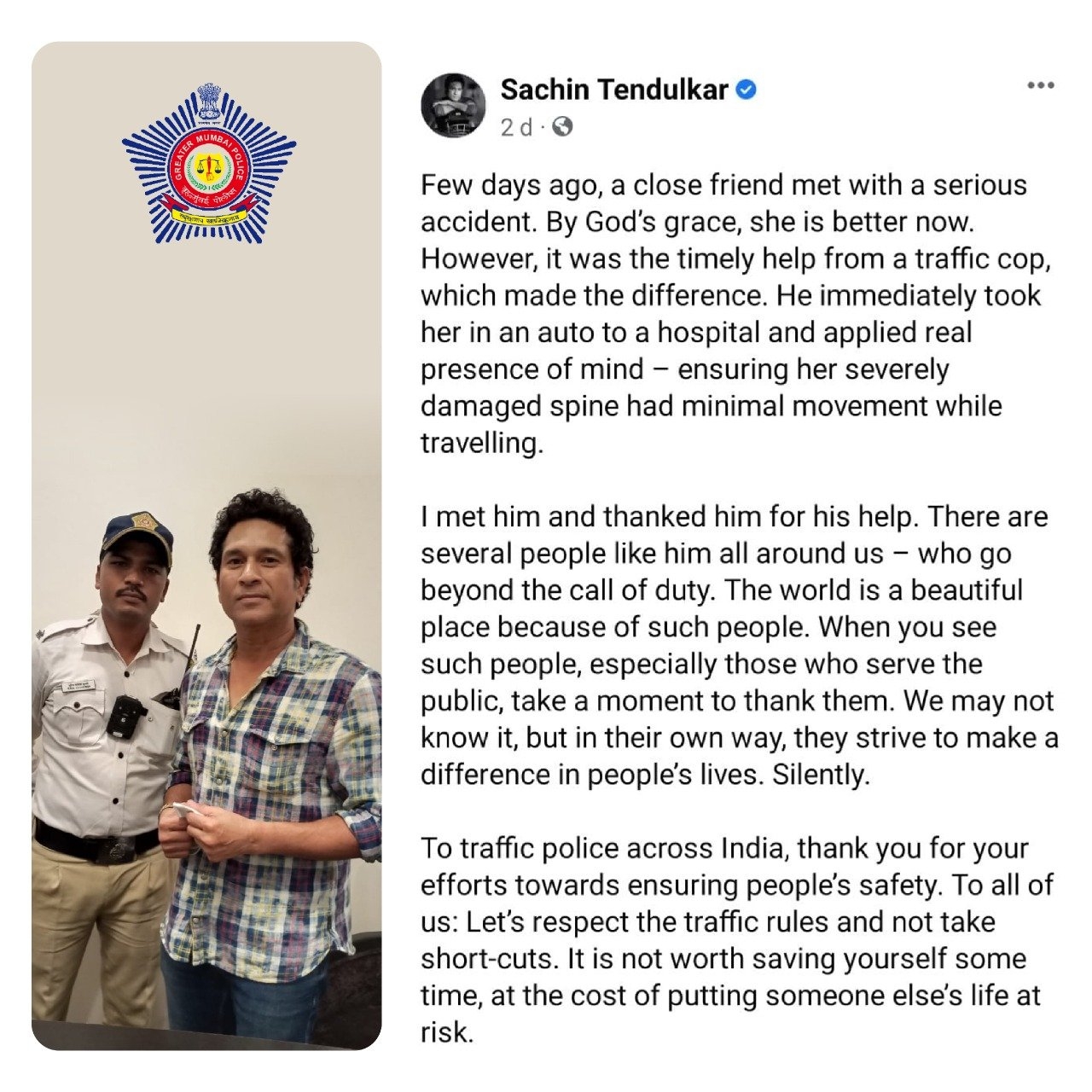 Former Indian Cricketer Sachin Tendulkar took to social media to applaud a Mumbai traffic constable who rushed his friend to the hospital soon after she was severely injured in a road accident.

Dhumse, attached to Santacruz traffic police, was posted at Santacruz police station junction on November 30. Around 4.45 PM, a truck dashed a cement pole installed over a gutter to release gas resulting in the pole falling on an auto-rickshaw in which Sachin's friend Nirupama Chavhan (47) was travelling.

"The pole was too heavy, with the help of locals, we managed to pull the victim out, the woman inside appeared to be seriously injured. I wasted no time and immediately rushed her to Nanavati hospital where she was admitted," said Dhumse.

Chavhan, who received serious injuries in the accident, needs a long surgery. When she was undergoing treatment, Tendulkar came to see her and after learning about the traffic cop and his efforts, he thanked him for saving his friend's life.

It was the timely help from a traffic cop, which made the difference. He immediately took her in an auto to a hospital and applied real presence of mind - ensuring her severely damaged spine had minimal movement while travelling, said the former cricketer in his post.

"I met him and thanked him for his help. There are several people like him all around us - who go beyond the call of duty. The world is a beautiful place because of such people. When you see such people, especially those who serve the public, take a moment to thank them. We may not know it, but in their way, they strive to make a difference in people's lives silently," said Tendulkar.

"To traffic police across India, thank you for your efforts towards ensuring people's safety. To all of us: Let's respect the traffic rules and not take shortcuts. It is not worth saving yourself some time, at the cost of putting someone else's life at risk," he added.