All routine operations and surgeries have been postponed until the stir is called off.
Swapnil Mishra 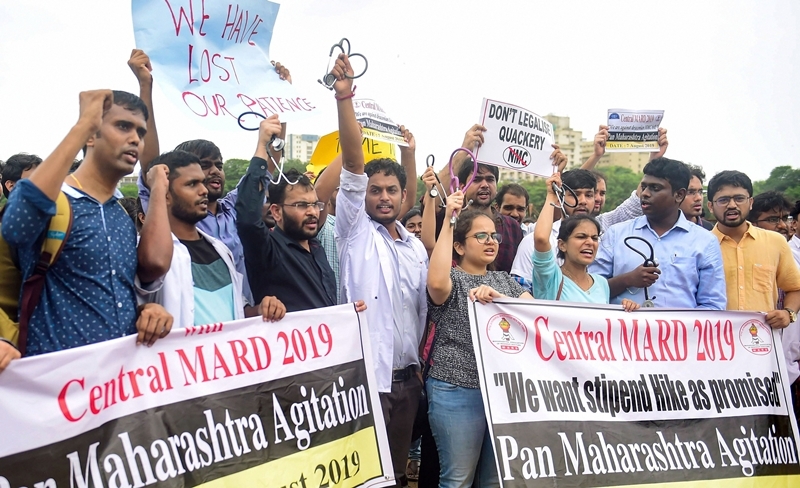 Mumbai: Patient care in the state and civic-run hospitals was crippled, as the Maharashtra Association of Resident Doctors (MARD) went on an indefinite strike starting Wednesday.

All routine operations and surgeries have been postponed until the stir is called off. Hospitals have made special arrangements, asking medical and nursing students to offer necessary aid to patients and their families.

MARD, the union of all resident doctors working in the 16 government medical colleges across the state, had called for a one-day strike on Wednesday to protest against the National Medical Commission (NMC) Bill and demand a hike in their stipend, which has been pending for the last two years.

More than 4,500 resident doctors statewide have joined the stir and were protesting at Azad Maidan on Wednesday. Dr Kalyani Dongre, president, Central MARD, said, apart from the stipend issue, they have other demands, for which they have only received promises from the state government.

“On January 1, we were assured by the state medical education minister Girish Mahajan our stipend would be hiked with retrospective effect, from August 2018. Except for assurances, we have received nothing so far,” said Dr Dongre.

She said they had been protesting since Wednesday afternoon and no official came to meet them. “Until our demands are met, all services, including outpatient depts and emergency, will remain shut across the state.

We want a raise in our stipend, the remedying of other irregularities, paid TB and maternity leave,” said Dr Dongre. Dr TP Lahane, head of the Directorate of Medical Research, said the residents could be put behind bars if they continued with their strike, as it is affecting patients.

“Currently, talks are being held, which will take time. If they continue with this protest, action will be taken against them under the Maharashtra Essential Services Maintenance Act,” said Dr Lahane.

However, on day one of the agitation, only one-third of OPDs in state- and civic-run hospitals were affected. “We had to postpone 25 per cent of the planned surgeries, but emergency worked as usual.

OPDs did not run to capacity, but neither were they shut,” said Dr Ramesh Bharmal, dean, BYL Nair Hospital and medical director of civic-run hospitals.

“All our undergrad and postgrad students will be at work. They will also take care of food distribution in wards. Lifts will be operated automatically. We have made necessary arrangements for a 3-day strike.