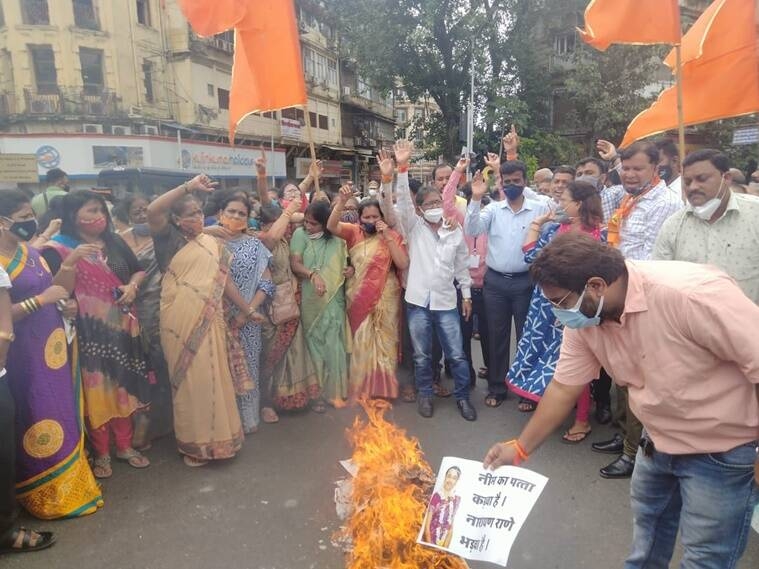 Police said 50 workers from each political party have been booked for rioting, violating COVID-19 norms and section 144 of the Indian Penal Code that restricts public movement. Meanwhile, another case was registered at Kasturba Marg Police station in Borivali (E) for shunting slogans and violating lockdown guidelines.

According to Santacruz Police sources, the force had already increased the deployment of officials outside Rane's residence, in anticipation that there would be an outbreak of riots between political parties.

At around 1.30pm, a clash broke out between Shiv Sena and BJP workers, and resulted in stone pelting.

Joint Commissioner of Police (Law and Order) Vishwas Nangre Patil stated that police had to resort to lathi charge to disperse both the groups. He added that two policemen were injured in the stone pelting incident.

Dnyaneshwar Ganore, senior inspector of Santacruz police station said, "Eight to nine police personnel sustained injuries, and a lathi charge had to be done to control the law and order situation. We have booked 50 Sena workers and 50 BJP workers, however, no arrests have been made as yet," Ganore added.
Another FIR was registered at Kasturba Marg police station. Sena workers were seen chanting slogans against BJP and violated lockdown guidelines. Mumbai Police, on Tuesday, released a statement that three FIRs registered regarding today's incidents, two cross FIRs at Santacruz police station and one at Kasturba Marg police station under relevant sections of the Indian Penal Code, Epidemic Disease Act and National Disaster Management Act.