Meanwhile, Murmu did not go to Matoshree to meet Shiv Sena chief Uddhav Thackeray nor the party MPs were invited at today’s meeting even after party’s decision to support her.

National Democratic Alliance (NDA) nominee for the Presidential election Droupadi Murmu on Thursday in an emotional speech narrated her story and thanked Prime Minister Narendra Modi for her nomination to the highest post. ‘’Minutes before the the BJP’s parliamentary board was to declare my name, Prime Minister Narendra Modi called me to convey the party’s decision. For few moments I was speechless as I was moved by the party’s decision. I thanked the PM and other senior leaders and the party in general for giving me such an opportunity. I will make all efforts to give justice to the post after my election,’’ she said amid applause from the legislators, MPs from BJP and Shinde camp and from the union ministers and Chief Minister Eknath Shinde and his deputy Devendra Fadnavis at the city’s five start hotel. 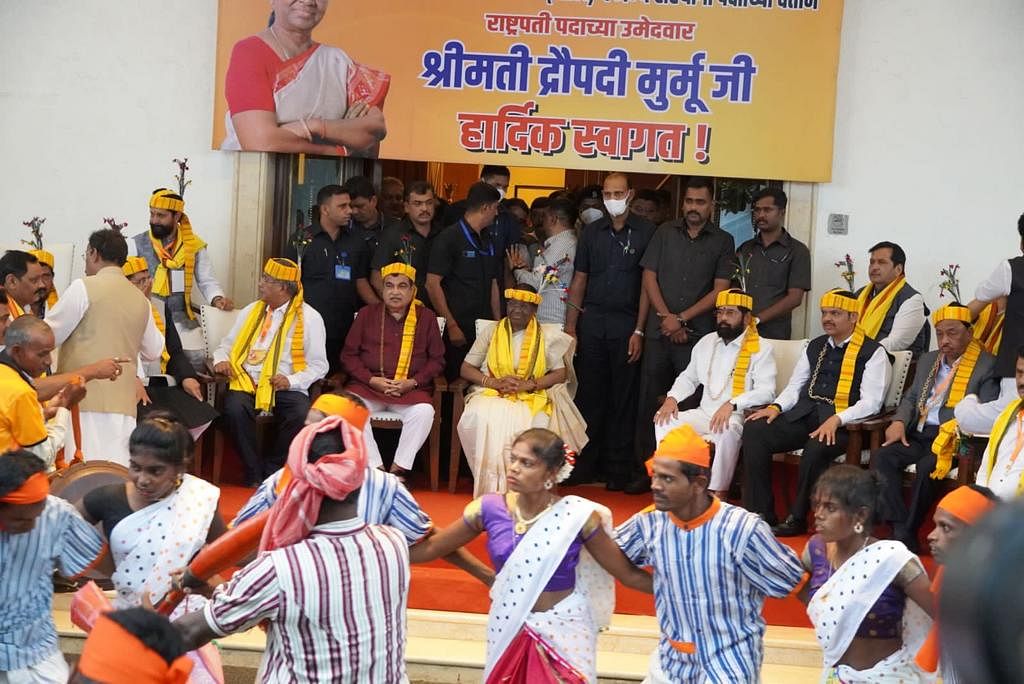 Murmu, who was earlier welcomed by Shinde and Fadnavis at the airport, was later welcomed in the traditional tribal style. Highly touched by the welcome accorded by the state leaders, Murmu won the audience by starting her campaign speech in Marathi while recalling the contribution of Chhatrapati Shivaji, BR Ambedkar, Mahatma Jyotiba Phule and Savitribai Phule in the empowerment and welfare of the people. She made a special mention of all India BJP secretary Vinod Tawde for travelling with her across the country since day one.

‘’I came from the tribal community and before I entered into the electoral politics I used to teach the tribal students so that they can pursue higher studies. I never thought of becoming Governor. After my tenure as the Jharkhand Governor was over, I was engaged myself in pursuing developmental and welfare works among the tribal community. Now, I have been made nominee for the Presidential election which is a great honour for me,’’ said Murmu.

Murmu reiterated that she has no political background or any godfathers but said she grew to this stage with hard work and dedication.

BJP legislator Manda Mhatre, who was present at the meeting, said,’’ Murmu madam came, saw and won the hearts of many with her speech. Her story will encourage party cadres to work relentlessly as they will certainly get recognition for their contribution. Her achievements have also sent a message that an ordinary worker can reach to the top post with hard work and without any political backing.’’

Meanwhile, Murmu did not go to Matoshree to meet Shiv Sena chief Uddhav Thackeray nor the party MPs were invited at today’s meeting even after party’s decision to support her.