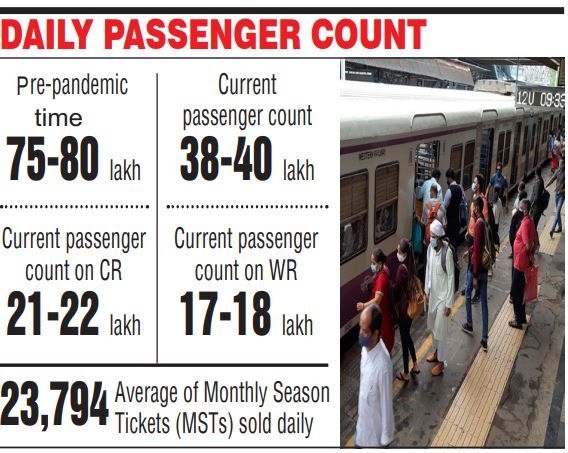 For the first time this year, the daily passenger count on Mumbai suburban is hovering around 38-40 lakh. Early this February, the daily average had touched 37 lakh. It has been a month since the railways started issuing monthly season tickets in the online format.

Over the past few days, since fully vaccinated people are being allowed to travel in local trains, there has been a steady rise in the number of passengers. The 40-lakh mark is half of what suburban locals used to carry in the pre-pandemic era and it’s an indication that people are inching towards normalcy even though experts are speaking of third wave.

On the Central Railway, the daily passenger count is around 21-22 lakh while that on Western Railway it’s 17-18 lakh on Main, Harbour and Trans-harbour lines. Meanwhile, the number of MSTs sold on September 13-14 is also an indication of a sudden increase in ridership on CR and WR.

On Monday and Tuesday, the CR sold 29,306 and 25858 monthly season tickets (MST), respectively. This is highest since August 11 when MSTs were sold after producing physical copies of vaccine certificates and August 15 when the online format began.

A railway official said, “We will continue to issue MSTs as we haven’t received any new guidelines from the state government. We expect the sales to grow as more fully vaccinated passengers are expected to travel after mid-September.”