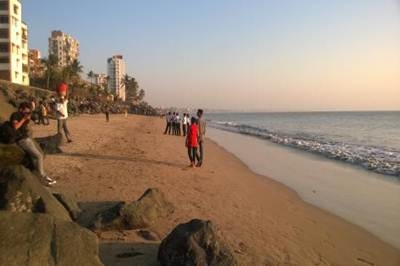 Local residents of Versova and City based green activists have decided to move the Bombay High Court in order to stop the ongoing construction of a compound wall at the Versova Beach.

On Saturday morning, a protest walk was called at the beach where group of local residents and environmentalists walked around the beach and spoke with the engineers deputed for carrying out the construction works. Environmentalist Zoru Bhathena, who was present during the walk said that construction of the bridge is almost completed and taking a legal step has become necessary.

"After we made complaints last year, the works had been called off and we were under the impression that the project has been suspended, but today we discovered that nothing really had stopped and we have no other option than moving the court," he said.

Another local resident - Priyanka Timmins who has been residing at Versova for more than two decades now have said that there is hardly any sand beach left in Versova.

"All the members were astonished to see that the entire beach has been now filled with rocks and tetrapods. Even though we reside in the vicinity of the beach, but none of us had the idea that something like this has been going on as most of us were staying indoors because of the lockdown," Timmins told FPJ.

She said that they were told that the boulders are being laid to prevent the residential properties from getting eroded due to the sea water.

"The societies could have just strengthen their walls to prevent it from erosion, there was no need to build another compound wall in the middle of the beach," Timmins said.

Another local Versova resident who didn't wish to be named said that all the local residents will be drafting a letter and will be sending it to the concerned authorities.

"Unless we all come together, we won't be able to protect the beach. So we have decided to approach each and every society and draft a joint letter demanding immediate suspension of the ongoing works and send it to all the authorities," the resident said.

Meanwhile a local PWD official associated with the project said that 90 percent of the project is finished and the work of placing boulders will be completed by end of this month.