Mumbai in midst of third wave of COVID-19: Here's a look at the current situation of Maharashtra's capital city 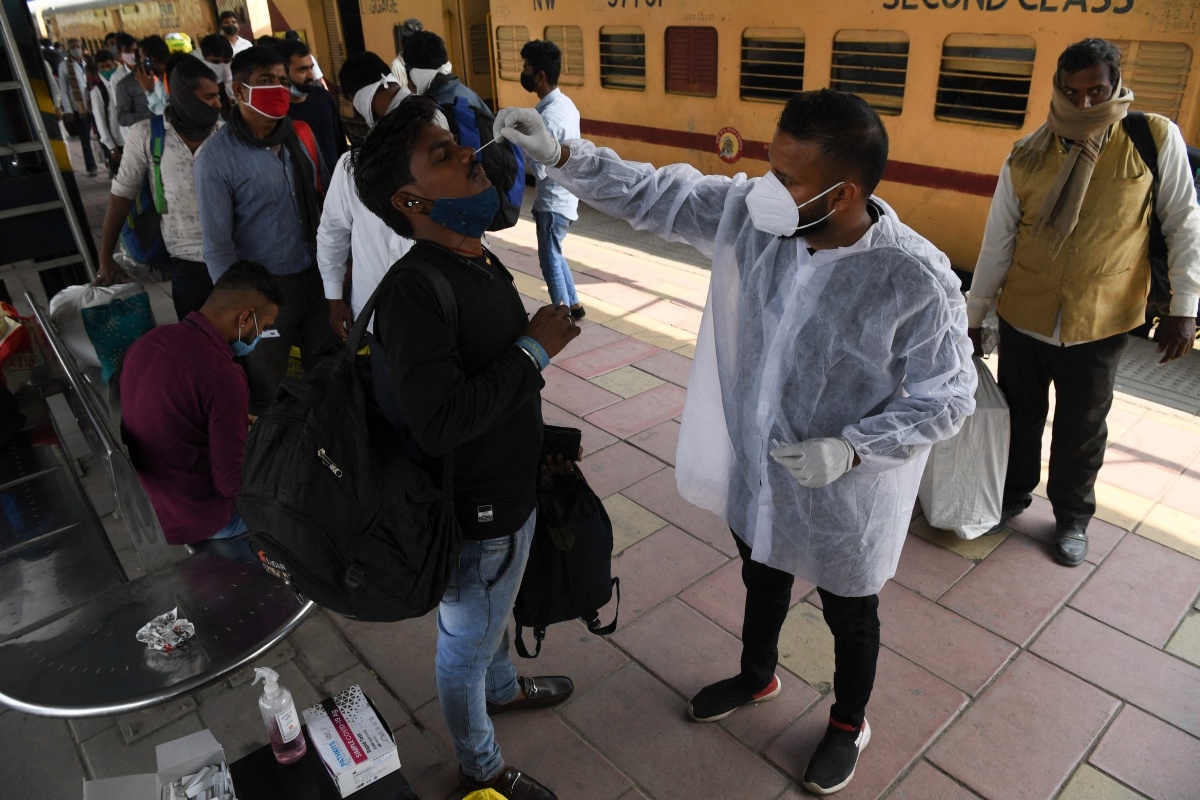 A medical staff (2R) takes a swab sample of a man for a reverse transcription polymerase chain reaction (RT-PCR) test during a Covid-19 coronavirus screening as passengers arrive at a railway platform in Mumbai on January 4, 2022. | INDRANIL MUKHERJEE

Mumbai: The financial capital is in the midst of much anticipated third wave of Covid 19, BMC officials have said, as the spread of Omicron has led to a massive doubling of cases in recent days. The Free Press Journal gives you a low down of the situation in Mumbai, as many describe this surge as a "Tsunami".

Describing the situation in Mumbai, Dr Rahul Baxi, Consultant Diabetologist at Bombay Hospital tweeted: "One of our senior doctors I was speaking to disagrees that we are in the midst of the third wave. He said, “People are mistaken this is a wave, it is actually a tsunami."

While the growth rate of cases has been on a rise across all wards atleast five wards have been registering a significant increase in the growth rate in the past few days.

Mumbai has been a Covid hotspot ever since the pandemic hit the country. However, cases had started declining significantly by September and October after being hit by the second wave of pandemic.

The second wave of Covid-19 hit the city from the second week of February, however, the number of cases reported daily as well as the active caseload of the city peaked during mid-April.

According to the dashboard, data of shared Brihanmumbai Municipal Corporation (BMC), on March 14, 2021, the active case count of the city stood at 13,940, it drastically jumped to 92,464 between April 11 and April 12. However, the number of Covid-19 cases dropped in the maximum city in June, and the active case count declined to 15,550 as of June 2021.

But since December, there has been a sudden surge in the number of cases reported daily.

"The surge in cases in K east and K west ward is due to incoming international passengers. Most of them are isolateded in the ward hence increasing the case count. The situation is not as bad even when cases reportedly daily has witnessed a massive surge. We still have a grip over death and the majority of patients either have mild or no symptoms," said BMC official.

"The present third wave of COVID-19 in Mumbai may not last for more than 4-5 weeks as per the experience of South Africa. Let's follow all covid protocols and wear masks," said Iqbal Singh Chahal, BMC commissioner.