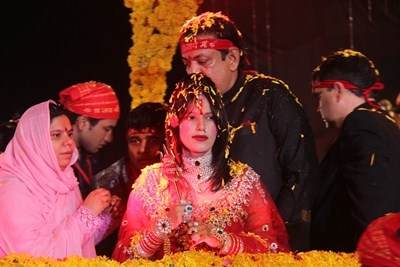 A woman has alleged that Radhe Maa instigated her husband and in-laws to demand dowry from her, even though she had given them jewellery worth over Rs.102 crore at the time of the marriage.

In her complaint lodged by the Kandivali police last week, the 32-year-old complainant has claimed that Radhe Maa allegedly asked her in-laws, including her chartered accountant husband, to make more dowry demands from her.

Despite repeated attempts by IANS, her official spokespersons did not comment on the developments and did not respond to messages.

Police are probing the matter and will take a decision on it subsequently, an official told media persons.

Radhe Maa claims to be a self-confessed fan of actor and former adult movie star Sunny Leone. Her pictures in short dresses, gyrating to Bollywood tunes with her devotees during satsangs (religious discourses) have gone viral on the social media networks.