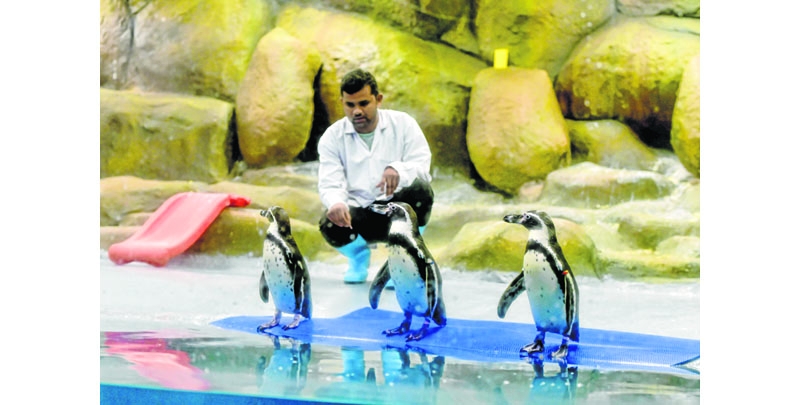 MUMBAI: Humboldt penguin at the Byculla Zoo after four-and-a-half-year-old penguin Flipper laid an egg on Thursday. in Mumbai on Saturday. July 07, 2018. (Photo by Bhushan Koyande) |

The Congress on Sunday criticised the Shiv Sena-ruled Mumbai civic body for floating a tender at an estimated cost of Rs 15 crore for the upkeep of seven penguins in the Byculla zoo here for the next three years.

Leader of Opposition in the Brihanmumbai Municipal Corporation (BMC) Ravi Raja of Congress told PTI that Rs 10 crore was already spent on penguins under the current contract of three years which ends this month.

"My objection is what is the need to spend so much again for the upkeep of penguins," he said.

The Mumbai civic body on August 13 issued a tender worth Rs 15.26 crore for 36 months for the upkeep of penguins including quarantine and their health management.

In a first, eight penguins- three males and five females- were brought to the Veermata Jijabai Bhosale Udyan, commonly known as the Byculla Zoo, in 2016. One of them died later.

Bringing the flightless birds to the zoo was a pet project of Yuva Sena leader Aaditya Thackeray, who currently heads the Tourism Ministry in the Maharashtra government.

The penguins had been procured from Coex Aquarium in Seoul, South Korea.

The enclosure for penguins is spread over 1,800 sq ft and consists of a water pool, accommodation area, air handling units and a cooling system.

Meanwhile, civic officials said the penguins were a major tourist attraction before the zoo was shut due to the COVID-19 pandemic.