The first point of contact of the eclipse was made at 4.49 pm. The time it reached the maximum eclipse was 5.30 pm. Since it had limitations till 6 pm, the Nehru science centre shut the viewing on time.

A view of solar eclipse in Mumbai. | FPJ Photo
Follow us on

Mumbai: A large number of people gathered at public spaces and preened from their respective windows and balconies to catch a glimpse of Tuesday's solar eclipse. The eclipse that fell during the Diwali period paused celebrations and many other "auspicious" activities, but got a number of curious and excited people on the streets to witness it.

People could be seen donning coloured glasses to protect their eyes while looking at the eclipse that started around 4.49 pm and went on till past 6 pm. Many people thronged to the Gateway of India, Marine Drive and similar open spaces across the city to witness the eclipse.

"The first point of contact of the eclipse was made at 4.49 pm. The time it reached the maximum eclipse was 5.30 pm. Since we had limitation till 6 pm, we shut the viewing here, "said Umesh Kumar Rustagi, director, Nehru Science Centre, Worli, who had made a number of arrangements for the eclipse.

Around 400 people had come to the centre to look at the eclipse, for which special arrangements were made. Three telescopes with filters were arranged. People were given spectacles with films to protect their eyes and welding glass. Arrangements were also made for live screening that was captured and relayed on a screen, and Facebook, among others.

People made the most of the little that they could see. Excitement was seen on the faces of people when they managed to see the moon eclipsing the giant fireball. Some people made a point of taking pictures of the same thing. 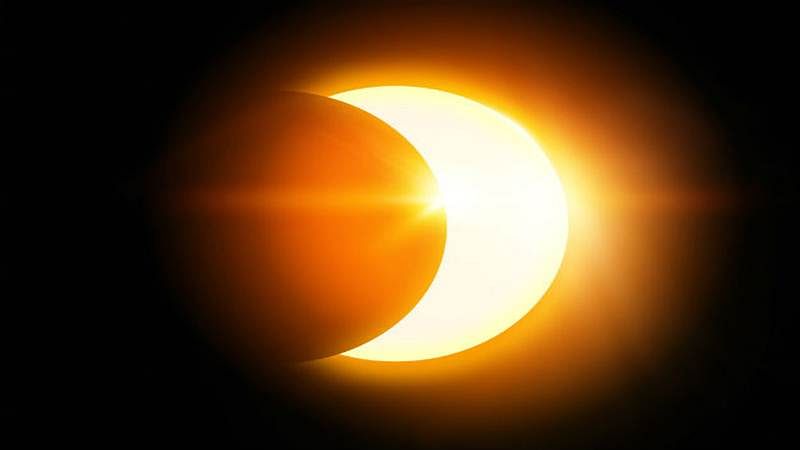