Mumbai: Chargesheet against Indrani, others in Byculla riots case 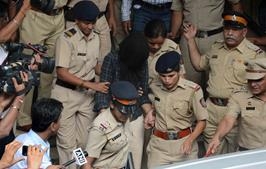 Mumbai; Indrani Mumkherjee, to be Produce in Bandra Court for Sheena Bora Murder case on Monday. Photo by BL SONI |

The crime branch recently filed the chargesheet against Indrani Mukerjea and 30 other jail inmates in the Byculla prison riots case of 2017, in which inmates had allegedly injured jail guards, broken the door to the prison roof, climbed on it and torched items in retaliation after six jailor staffers brutally assaulted a prison inmate Manjula Shetye, leading to her death later.

The chargesheet came to be filed before the Esplanade court. In the riots incident, the FIR had been registered first in the Nagpada police station and the case later came to be transferred to the crime branch. Around 300 inmates had been booked in the FIR for rioting and unlawful assembly. The angry inmates had allegedly destroyed jail furniture and gone on to burn books and papers. Five jail guards were allegedly injured in the incident. Only after they were assured by the police that intervened, that an FIR would be registered against jail staff for Shetye’s death, had they stopped the protest.

Shetye, who was serving a life term in Byculla jail, was beaten mercilessly by six jail staff and a stick inserted into her private part, leading to her death on June 23, 2017. Shetye had allegedly been left in an unconscious state and other inmates threatened against helping her. She died in hospital where she was taken with delay. Trial is now ongoing against the then jailor and five jail staffers in a sessions court.