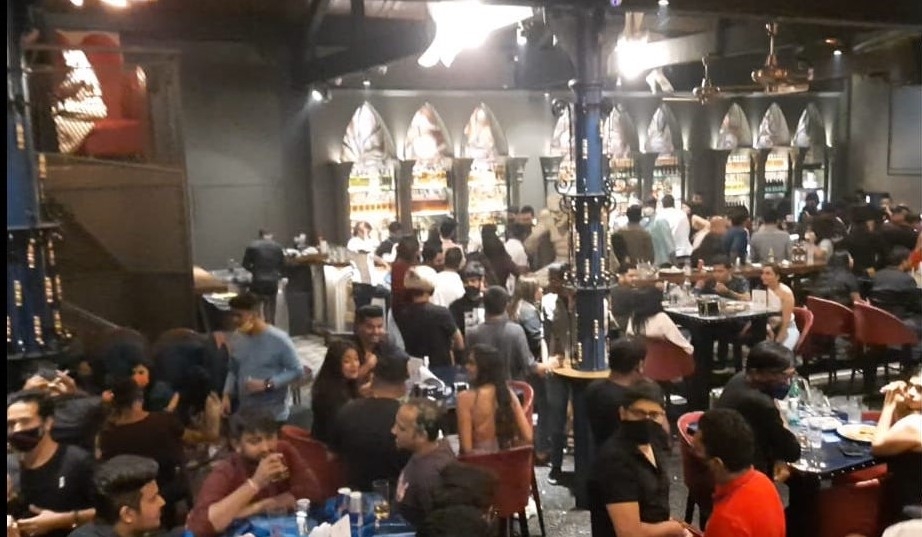 With the number of Covid-19 cases steadily declining across the city comes the news of Mumbaikars being lulled into a false sense of normalcy and throwing caution to the wind. At a ward-level spot inspection of restrobars and night clubs last week, a BMC team found a diner and bar in Lower Parel's Mathuradas Mill Compound blatantly violating pandemic norms and registered an FIR.

According to BMC officials, a 'global' dining and bar place, Epitome, in Lower Parel, was open even past midnight and there was hardly any social distancing between patrons and many of them as well as the staff were found without masks. The civic body has filed an FIR against the owner and management of Epitome.

''When we reached the spot, the management was insisting that they had almost closed down. On entering the premises, we found more than 400 people were still inside past 11.45 pm. We saw how safety protocol had gone for a toss at that place," said a BMC official.

While for the record 400 people were found at Epitome, according to civic officials the actual number was higher. “There were more than 500 people there. However, on seeing BMC clean-up marshals and a police team entering the place, many fled the scene. After our team informed the local police, the information of the raid was leaked and many managed to flee. We have also warned two other two bars in Bandra and Vile Parle about the same,” said BMC Commissioner Iqbal Singh Chahal, adding that the civic body had received complaints that the diner and bar operated past midnight, with crowds thronging every day.

While 400 people were found at the place flouting social distancing norms, scores of them were without masks, said BMC officials. “This was a joint action by the BMC and Mumbai Police. Many were wearing face masks improperly and we let them off with a warning. However, we caught a total of 67 people without masks. All 67 were fined Rs 200 and were given face masks," said a BMC official.

The action by BMC and Mumbai Police also indicates that authorities will be strict about enforcing Covid-19 norms in the upcoming festivities - Christmas and New Year's eve. When the nation's financial capital resurrected its nightlife, following easing of lockdown restrictions, civic authorities had issued standard operating procedures (SOPs), which prohibited serving standing customers and packing the facilities beyond 50 per cent of their approved seating capacity.

According to BMC officials, more such raids/ inspection will be conducted to ensure, restaurants, night clubs and bars are in compliance with the SOPs. “Starting Saturday, I have given these restaurants, night clubs and bars 15 days to follow the SOPs. After a fortnight, if we find these establishments flouting norms, we will impose night curfew and ensure that these places are shut before 11pm every day. All this is for the safety of Mumbaikars, but even they have to contribute to this by not being complacent in the fight against coronavirus," warned Chahal.