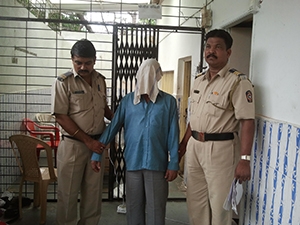 Bhayandar : The Vasai Sessions Court, has awarded life sentence to a 44-year-old step father, who instead of playing guardian of two unfortunate and innocent children had turned their sexual tormentor. Apart from announcing a life sentence, First Class Judicial Magistrate, R  M Joshi, also ordered monetary compensation of Rs 1 lakh each to both the kids, failing which the convict will have to spend an additional year in jail.

Public Prosecutor, Ujwala Mohalkar, built up a strong case, supported by ample evidence against the monster step dad and this led to his conviction. The monster dad, identified as Zakir Alam Shaikh (44), who was arrested in June, 2013, not only violated his 11-year-old step daughter, but also sodomised his 12-year-old step son for a period of more than two years, at their tenement in the Samel Pada area of Nallasopara (East).

Shaikh worked with a private company and had married the victim’s mother in 2009. In her complaint to the police, the victim’s mother stated that Alam, repeatedly committed the heinous crime for more than two years, when she stepped out of the house to work, however, both the children remained silent due to fear. But when the siblings could not take it any more, they mustered courage and narrated the horrific tale to their mother.

Enraged and shocked, the victims’ mother lodged a complaint against her husband at the Nallasopara police station. While the girl studies in Standard VI, her elder brother is a Standard VII student of a private school, the police said. After learning that his wife had registered a complaint, Shaikh had gone absconding, but was arrested a few days later from his relatives’ house in Govandi.

The police has registered a case under Section 376 (rape) and 377 ( unnatural offence) of the IPC and under the relevant sections of the Protection of Children from Sexual Offences Act against Shaikh.