Over 200 agitators shouted slogans and vandalised a dumper laden with metro muck, shattering its windshield in the process.
Staff Reporter 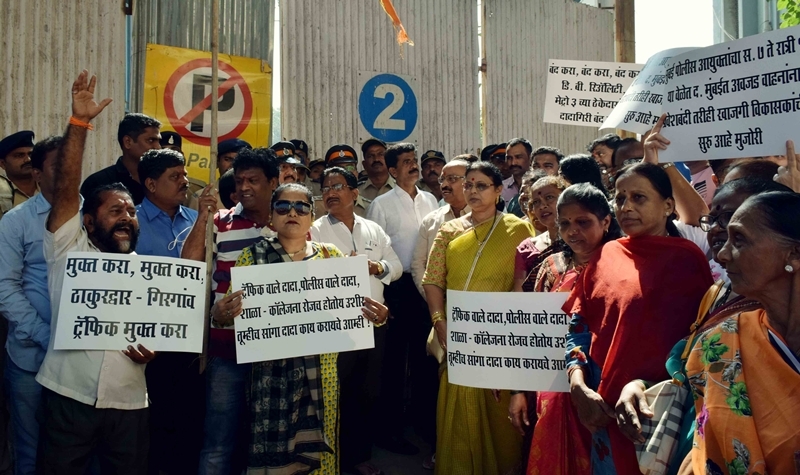 Mumbai: Irked by the daily inconvenience suffered by residents, schoolchildren and motorists due to the ongoing Metro III (Colaba-Bandra-SEEPZ) work, a protest was organised by the Shiv Sena's South Mumbai wing and Girgaum residents at Thakurdwar on Monday.

Over 200 agitators shouted slogans and vandalised a dumper laden with metro muck, shattering its windshield in the process. Police said protesters broke the windshield of a dumper belonging to one of the metro contractors. Metro Line-3 to have interchanging stations

The truck was parked outside Charni Road station. The protesters shouted slogans against the MMRDA, the state-run firm undertaking the project, and private developer DB Realty, according to the police.

According to agitators, there are frequent traffic snarls in the area and allegedly the Metro-III authorities have failed to assist them. Not only has the metro construction blocked major roads but the construction by a private builder has worsened the situation, they claimed.

Sena leader Ravindra Nirlekar from Girgaum said they demanded a probe to determine who had allowed the entry of heavy vehicles into the narrow lanes of the area.

Another Sena leader, Pandurang Sakpal, said, "As per traffic rules in South Mumbai, heavy vehicles are not allowed. Despite this, the Metro-III authority is flouting the rules and endangering the lives of residents. Moreover, the school vans and buses are also delayed by the chaotic traffic situation.”