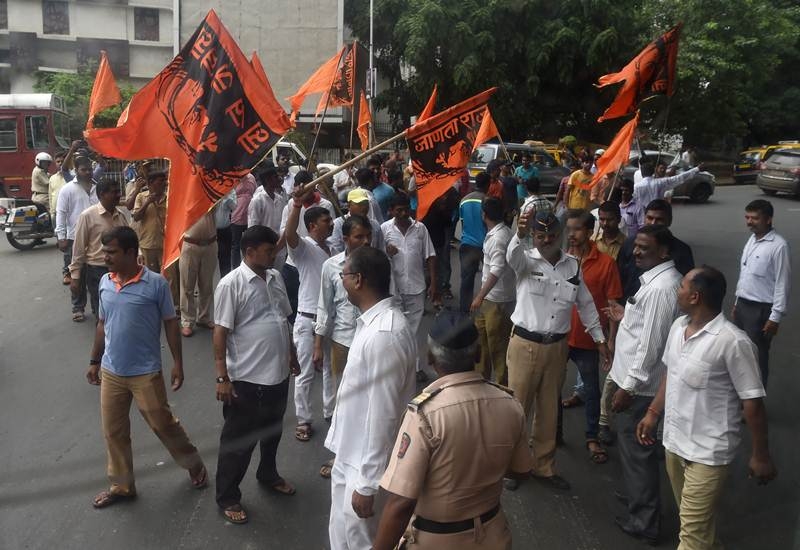 Indian members of the Maratha community in the state of Maharashtra stand in front of a bus as they try to block traffic during a protest. PTI |

Chief Minister Uddhav Thackeray, on Saturday, chaired a meeting with the cabinet sub-committee members and reviewed the preparations for the hearing on the Maratha reservation cases slated for July 27 in the Supreme Court. The state government has moved an application for hearing by the Constitution Bench.

The apex court is hearing a main petition challenging the 12 per cent reservation in the post graduate medical admission process. The Supreme Court, on July 15, had refused to give interim stay on the post graduate medical admission process. Further, the apex court will also hear a petition challenging the implementation of the 12 per cent quota in education and 13 per cent in jobs to the Maratha community as per the provisions of the Socially and Educationally Backward Classes (SEBC) Act, 2018. The Bombay High Court in June 2019 had upheld the Act, although it did not accept the provision of 16 per cent quota.

Patil told the Free Press Journal that he was the first to move an application for hearing by the Constitution Bench. “The government should have supported that. However, it is good that the government has made a similar plea. I strongly hope that the Maratha quota will pass the Supreme Court test,’’ he noted.

The petitioners have challenged the Bombay High Court's decision. They have submitted that the SEBC Act, 2018 breached the 50 percent ceiling on reservation fixed by the apex court in its landmark judgment in the Mandal verdict.