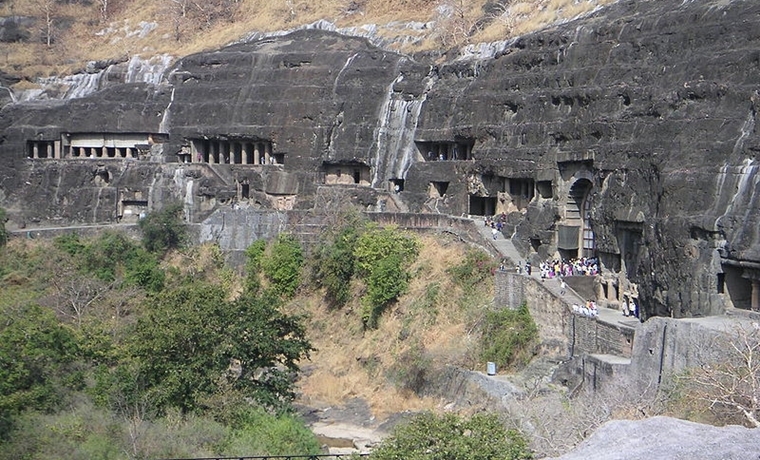 Aurangabad: The number of tourists visiting the famous Ajanta Caves in Maharashtra has been going down due to poor condition of the key connecting road as its repair and widening work got delayed due to deficient services of the contractual agency, officials said.

Besides, there were 29 visitors from SAARC countries between January and September 2018, but there has not been a single tourist so far this year from those nations. Similarly, total 3,001 people from BIMSTEC countries visited this UNESCO heritage site from January to September 2018, but the number went down to 2,268 this year during the same period, according to the ASI data.

The delay in completion of widening work of the 150-km Aurangabad-Sillod-Ajanta-Jalgaon highway poses a big hurdle for people to visit the caves, Jaswant Singh, head of the Aurangabad Tourism Development Foundation, a local body of tour operators, told PTI. Guide Ratnakar Shewale, who is proficient in Japanese and Spanish languages, also said that the connectivity between Aurangabad and Ajanta, located around 100 km from the district headquarters, has become poor due to the delayed road work.

"Many a times tourists on way to the caves return mid-way because of potholes on the road. This is affecting the livelihood of guides as well as the local hotel industry. This year, we earned just half of what we used to earn in previous years," he claimed. When contacted, Public Works Department's (PWD) superintending engineer Prashant Auti said some irregularities were found in the work of contractor assigned the Aurangabad- Sillod-Ajanta-Jalgaon road project.

"We have terminated services of that agency, and a sub-letting process is on. We expect to start the work next month in a full-fledged manner. If everything goes smooth, we can make the road motorable in 12 months," he said. Another PWD official said the work order for repairing two lanes of the Aurangabad-Jalgaon road with paved shoulders was given in June 2017 and was supposed to be completed by June this year.

In the meantime, this work was expanded to four lanes in January this year. "Now, a new deadline of January 2021 has been set up for completion of the work," the official added. Noting that footfalls have been going down, ASI's superintending archaeologist Dr D K Khamari said, "We are expecting the road work to be completed as soon as possible so that tourists can have a smooth visit to the Ajanta Caves."