The opposition cornered the Shinde-Fadnavis government by repeatedly shouting ‘’50 Khoke all is ok (boxes full of cash everything is fine).

Mumbai: In an unprecedented incident, the ruling Shiv Sena MLAs supporting Maharashtra Chief Minister Eknath Shinde and some opposition legislators came face to face at the entrance of Vidhan Bhavan and shouted slogans against each other. The scuffle took place between legislators from both sides and ultimately the marshals were deployed to disperse them. However, senior legislators intervened to calm the agitated legislators.

The trigger was the opposition’s slogans on the rebellion staged by Eknath Shinde and the formation of the Shinde-Fadnavis government. The clash took place before the commencement of the proceedings of the assembly and the council.

The opposition cornered the Shinde-Fadnavis government by repeatedly shouting ‘’50 Khoke all is ok (boxes full of cash everything is fine). 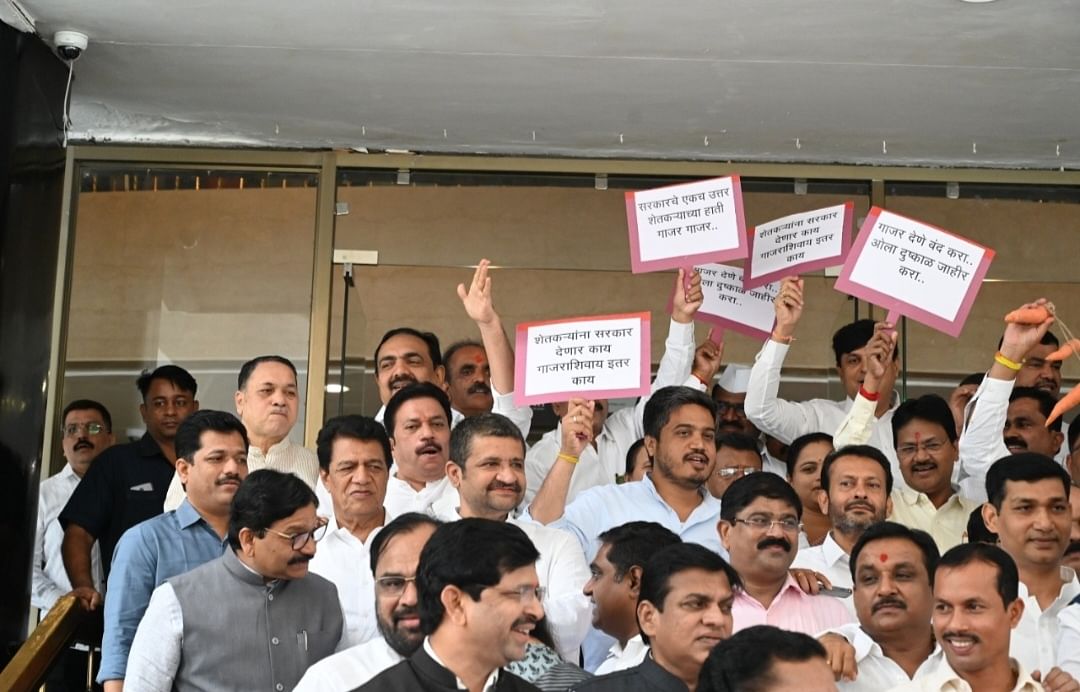 NCP legislator Anil Mitkari and Shinde camp MLA Mahesh Shinde allegedly roughed up each other. Mitkari complained to Chief Minister Eknath Shinde about the abuses allegedly hurled by the ruling legislators against the opposition.

‘’We staged a protest on the steps of Vidhan Bhavan against the corruption and scams. We are not cowards. If someone attacks we will counter it,’’ he warned. He alleged that the opposition gathered and shouted slogans to divert the focus.

Gogawale said they would vacate the steps after their protest was over.

Another Shinde camp legislator Dilip Lande said they were trying to present the facts before the people in a democratic manner.

‘’No one has threatened anyone. Like the opposition, we also have the right to protest. Whoever comes forward, they will be taken by the horns,’’ he warned.

Leader of Opposition Ajit Pawar expressed serious concern over the clash between the ruling and opposition. Speaking a few minutes before the commotion Pawar said, ‘’The slogan of ‘50 boxes all ok’ is so popular that the ruling legislators seemed to be angry,’’ he noted.