The incident had occurred in Pimpri city on Saturday in apparent protest against minister Patil's controversial remark about Dr B R Ambedkar and social reformer Mahatma Jyotiba Phule.

Pune: The Pimpri Chichwad police in Maharashtra's Pune district have suspended three of its officers and seven other personnel in connection with the incident in which ink was thrown at senior Maharashtra minister Chandrakant Patil, a top official said on Sunday.

The incident had occurred in Pimpri city on Saturday in apparent protest against minister Patil's controversial remark about Dr B R Ambedkar and social reformer Mahatma Jyotiba Phule.

"We have suspended seven police personnel and three officers in connection with the incident. All of them were part of the minister's security cover during his visit," Pimpri Chinchwad Police Commissioner Ankush Shinde said.

Three people threw ink at Patil on Saturday evening when he was stepping out of one of the office-bearer's house in Pimpri. Police have detained the trio involved in the act.

The attack on the senior BJP leader came a day after he made a statement in Aurangabad district. 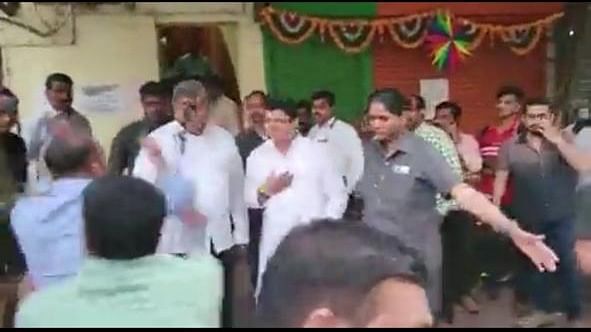 Patil made statements about Ambedkar and Phule

Speaking in Marathi at an event in Aurangabad on Friday, Patil, the Higher and Technical Education Minister, had said that Ambedkar and Phule did not seek government grants for running educational institutions, they "begged" people to gather funds for starting schools and colleges.

The use of the word "begged" stirred up a controversy.

After the attack, Patil requested state Home Minister Devendra Fadnavis not to take action against any police officer or personnel for security lapse. He had also said that his statement was misconstrued.