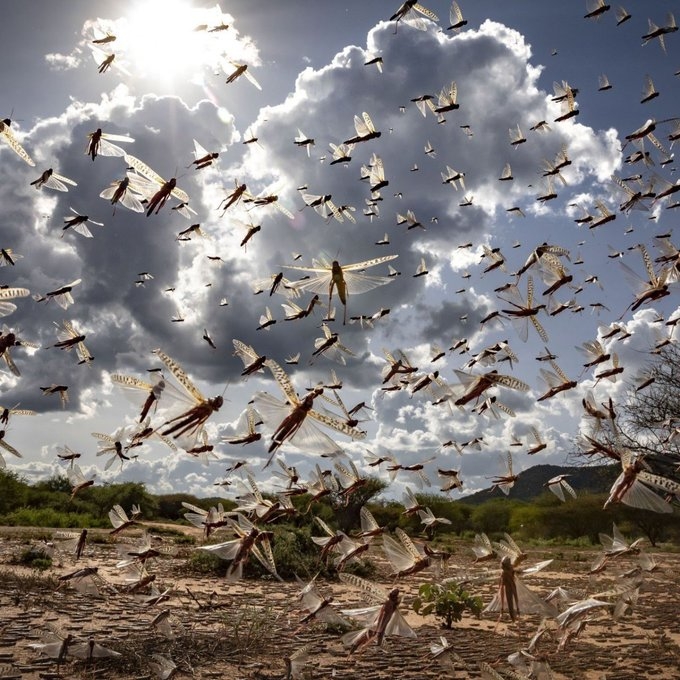 As parts of Maharashtra and other states face attacks from locusts, which destroy crops and vegetation, an agriculture university has suggested a slew of measures like destroying their eggs and spraying neem oil on crops to tackle threat from the migratory pests.

Earlier on Thursday, officials had said the swarms were moving eastwards, towards Gondia district of Maharashtra after entering Bhandara from Nagpur district on Wednesday.

The Vasantrao Naik Agriculture University at Parbhani in Marathwada said threat from swarms of locusts destroying crops and travelling long distances in search of food can be tackled by undertaking certain measures.

Destroying their eggs, digging trenches of a specific size and spraying neem oil on standing crops are some of the effective methods to tackle the menace caused by locusts (schistocerca gregaria), it said in a statement.

The department of agricultural entomology of the university published a set of guidelines on Thursday for farmers in this regard.

"Female locusts lay 50 to 100 eggs in moist sandy land. The hatching period of these eggs depends on environment and may stretch from two to four weeks. Larvae cannot fly immediately when they come out," the varsity said.

The university suggested destroying those eggs in groups.

Farmers can dig trenches in a size of 60 centimeters wide and 75 centimeters deep which can help to catch small locusts from the flock, it said.

According to university experts, larvae when they grow and start flying in groups, can destroy leaves, branches, flowers and seeds.

Adult locusts can eat food equivalent to their weight and can fly with a speed ranging from 12 to 16 km per hour, they said.

"If a swarm of locusts is in one square km area, their weight can be up to 3,000 quintals. Their flocks can be neutralised during night time (which is their resting time) with the help of smoke.

"But farmers need to be very careful and ensure their crops do not catch fire," the university said.

Spraying 2.5 litres of neem oil per hectare has also proved effective in controlling swarms of locusts, it said.