Jingle all the way: Mumbaikars gear up to celebrate Christmas

Churches and cathedrals across the city are lit up, children sporting Santa caps can be seen in church premises.
Pratip Acharya 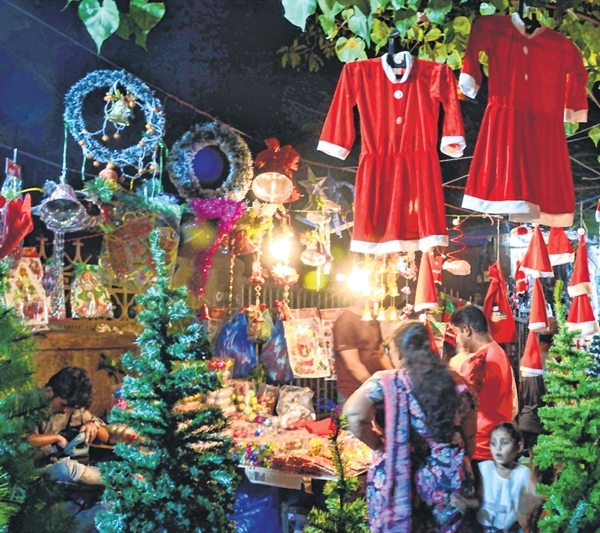 Mumbai: It's Christmas eve and the city is exuding festive cheer. From Colaba to Girgaum, Bandra to Borivli, the city is all decked up, for the twin celebrations in store - Christmas and New Year.

Churches and cathedrals across the city are lit up, children sporting Santa caps can be seen in church premises. Shops in markets are stacked with seasonal goodies and decorations.

At Mount Mary Church in Bandra West, special lights from the cathedral ceiling, coupled with the red banners on the walls add to the beauty of the architecture. Father Michael informed, a footfall of 3, 000 people is expected for midnight mass.

Earlier, the mass took place on the Basilica premises, but because of a significant rise in the number of worshippers, they were compelled to move the service outside, into the quadrangle of the church .

Carolling and Christmas bazaars had already begun drawing crowds in many churches. At Girgaum's St Theresa's Church, this year too, there was a fun fair in the week preceding Christmas, like in previous years.

A church official informed, this year's fair witnessed a record 2, 000 people visiting, from various religious backgrounds. The church also spends a significant part of the funds raised during the Christmas week to help children with cancer.

Meanwhile, the city's markets are enveloped in hues of red, green and white. Shopligbts brightly beckon, with smiling Santa Clauses and Christmas carols being played in the background. The Hill Road market in Bandra looks like a wonderland, despite all the hustling and bustling.

This year's special attractions are the musical Santa Claus and lit-up snow globes and fig trees, vendors informed. Narayan Pradhan, owner of a 25-year-old souvenir store on Hill Road, informed that the larger-than-life Santa Clauses have been a big draw for children.