HomeMumbaiIs it Ganesh Chaturthi or Ganesh Utsav? Here is the difference

Is it Ganesh Chaturthi or Ganesh Utsav? Here is the difference

As we get ready to welcome Ganpati Bappa, one big question that comes to mind is - what is the 10-day celebration called? Is it Ganesh Chaturthi or Ganesh Utsav?

Lord Ganesh is considered a symbol of wisdom, writing, travel, commerce and good fortune. He is also called Gajanana, Gajadanta, and Vighnaharta. These are few names among his 108 other titles.

As per the panchang, the traditional moon calendar followed in India for celebrating festivals, Ganesh Chaturthi falls on September 10 this year. It marks the beginning of the 10-day celebration that ends on September 21, which is known as Anant Chaturdashi.

Ganesh Chaturthi is also known as Vinayaka Chaturti and celebrates the arrival of Lord Ganesha to earth from Kailash Parvat with his mother Goddess Parvati/Gauri.

It is believed that in these 10 days Lord Ganesha graces the earth and brings happiness, wisdom and prosperity for his devotees. The 10-day celebration generally occurs in the month of Bhadrapada and the dates are usually set in August-September period as per the moon calendar. Devotees celebrate this festival by installing clay idols of Ganesha. This is done either in private homes or public spaces by making pandals or stages.

The entire 10-day festival is however known as Ganesh Utsav.

Ganesh Utsav assumed the nature of a gala public celebration when the Maratha ruler Shivaji used it to encourage nationalist sentiment among his subjects, who were fighting the Mughals. In 1893, when the British banned political assemblies, the festival was revived by the Indian nationalist leader Bal Gangadhar Tilak.

Again this celebration is different from Lord Ganesha’s birthday which occurs in the month of Magh and is celebrated as Maghi Ganpati. Maghi Ganesh Jayanti is a more traditional celebration of the birth of the elephant god. A lore associated with the event is that of the Moon mocking Lord Ganesha falling off his ride. This led to Lord Ganesha to curse the Moon, which now causes the waxing and waning every 15 days. 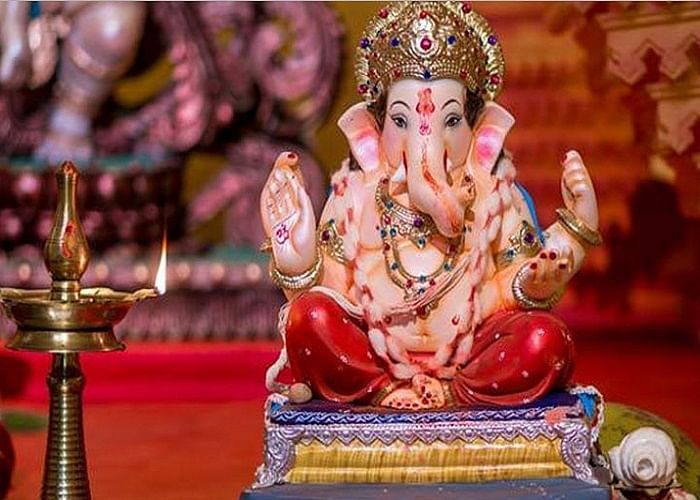