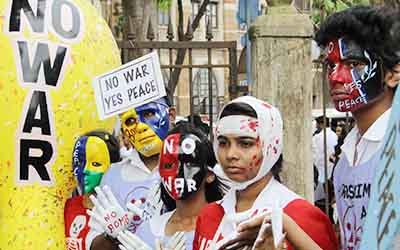 Mumbai: More than 1700 students , NSS volunteers of SNDT University and University of Mumbai participating in "No to nuclear weapons!" peace rally and took the pledge to work for peace and a Nuclear free world to remembered 6th August - Hiroshima Peace Day in Mumbai on Thursday. Photo by BL SONI |

Mumbai : Over 1,700 students participated in a peace rally to commemorate Hiroshima Day here on Thursday.

The rally, organised by Bombay Sarvodaya Mandal, began from Azad Maidan and culminated at Hutatma Chowk in south Mumbai.

“The children took a pledge to work for a nuclear-free world and create awareness about the holocaust,” said TRK Somaiya of the Bombay Sarvodaya Mandal.

The Gandhian outfit organised the rally along with the NSS units of SNDT University and Mumbai University. Gandhian workers and peace activists joined the rally. Hiroshima Day commemorates August 6, 1945 when at the height of World War II the US dropped an atomic bomb on the Japanese city of Hiroshima, followed three days later by another bomb on Nagasaki.