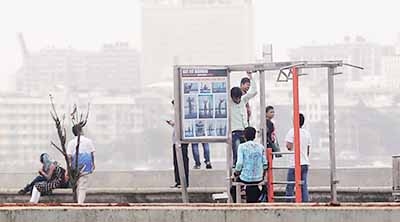 Mumbai : The Bombay High Court on Thursday directed the BMC to appoint a three-member committee to probe the issue of an open gymnasium at the Marine Drive promenade.

A PIL has challenged permission being granted for an open gymnasium on Marine Drive. The PIL has questioned how the BMC, while “banning” pandals for religious purposes, is granting permission for such structures.

The High Court heard a PIL filed by businessman-cum-social worker Vinay Yadav, who challenged the BMC’s decision to grant permission for three months to DM Fitness Limited to erect a fitness centre on the footpath despite objections by the local assistant commissioner.

The petition said that the place is declared a ‘heritage’ area and no construction can be permitted on the footpath, particularly since permissions were declined earlier. Further, the footpath is for pedestrians but BMC officials are “bent on supporting a political party only because the said party happens to be a ruling party”.

Yadav has sought the cancellation of permission and for direction to the BMC to remove the “so-called” fitness centre.

The court also made remarks on why such petty issues came to the court, and why the BMC cannot resolve it on its own.