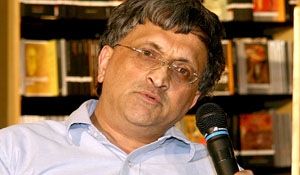 Mumbai : “I am a person of moderate views. These are sometimes expressed in extreme fashion,” thus begins the first page of noted historian Ramachandra Guha’s new book ‘Patriots and Partisans’. Speaking on the eve of its launch on the second day of Literary Carnival Festival, being held in the city, Guha was as fiery as he was entertaining when he spoke about being a liberal democrat.

The now ruling Congress is a party of ‘chamchagiri’, he said, which was launched in 1971 after Indira Gandhi split the Congress party.

“Once when in Delhi, I asked a Congress Member of Parliament (MP) and a friend of mine why Connought Circus (where Rahul Gandhi lives) was renamed Indira Gandhi Chowk. The MP told me, ‘So that she would hold Rahul in embrace forever’,” said Guha, tongue-in-cheek, as the audience burst into peals of laughter.

“DMK was a great party of progressive social reforms. If Gandhi didn’t make her party a family firm, M Karunanidhi or even Balasaheb Thackeray wouldn’t have had the guts to do the same with their respective parties,” he said.

The problem with the Indian outlook towards reformation is that India looks for “one great emancipator” to save India, Guha asserted. “Power is distributed till gram panchayats. India has 28 states. Even if we have 12 good chief ministers, that will work for reformation.”

Guha also criticised the Maoist movement in India. Stating that  the movement is today only weapon-oriented, he said the Maoists are feeling too insecure to have a free debate. He, however, praised the Indian model of secularism that he said isn’t an adoption from the West, as it allows for religious pluralism.

At a subsequent panel, two eminent non-fiction writers Suketu Mehta and Katherine Boo shared their experiences about writing from countries where they are essentially outsiders.

Boo, who recently wrote a book on life in Indian slums based on her experiences in Annawadi slums in Mumbai, said the pre-existing body of works about Indian slums are too sensational.

“At Annawadi, there was a jamun-tree behind a sewer on which a lot of parrots used to sit. People frequently caught parrots and sold them. But Sunil (a resident of the slums, also a person in her book) felt so strongly against that that he took efforts to convince people against it. He could have used the money but he had strong principles,” she recalled. Such anecdotes cannot be derived by sticking a microphone up and bluntly asking questions, she said and added that it takes a lot of patience to discover such behaviour in people.

Suketu Mehta, the Indian writer who is now working on his second book on New York after ‘Maximum City’, said some of the best books about places are written by non-natives.

“There is a renaissance in literary reportage,” he said, dedicating his new book to his two sons, since New York was where they were born.

Highlights of the festival on Day 2:

– Historian William Dalrymple released his new work ‘Return of a King: The Battle for Afghanistan 1839-42’