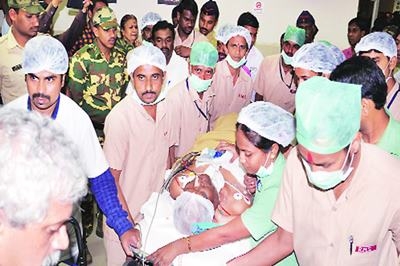 Mumbai : The mortal remains of Govind Pansare was flown to Kolhapur in a chartered flight for the last rites after the veteran CPI leader succumbed to bullet injuries at a hospital here late last night. The flight which took off at 11.40 A.M. was expected to reach Kolhapur around 12.30 P.M.

Dean of Maharashtra government’s JJ Hospital in Mumbai, Dr PP Lahane, said family members of the 82-year-old leader accompanied the body. The post mortem was conducted on the senior communist leader’s body this morning. Pansare, who was air-lifted to the city yesterday and admitted at the Breach Candy hospital, passed away while undergoing treatment after he developed bleeding in his lungs.

“Pansare developed bleeding in the lungs, which led to heart failure and he succumbed at 10.45 PM,” Lahane had said. Prominent anti-toll protester Pansare was shot at along with his wife bu unknown assailants in Kolhapur on February 16 while they were taking a morning walk.