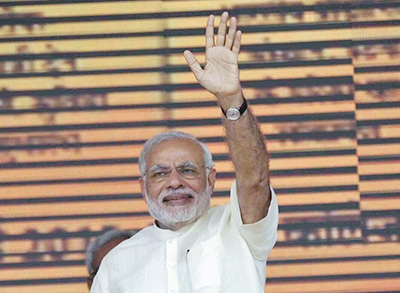 Aurangabad: Prime Minister Narendra Modi on Saturday said Rs 3.5 lakh crore will be spent in the next five years under the newly formed Jal Jeevan Mission, which aims to provide piped water ('Har Ghar Jal') to all rural households by 2024.

He said the move was aimed at fulfilling legendary socialist late Ram Manohar Lohia's dream of providing water, and toilets, to mitigate the hardships faced by women. "In the 70s, Ram Manohar Lohia had said women faced two problems -toilets and water. Governments have come and gone. But, we decided to fulfil Lohia's dream. We worked on providing toilets to women and ensuring water supply," Modi said.

He also praised the Maharashtra government's water grid initiative in the arid Marathwada region, claiming that availability of water will increase in every house once the scheme is completed. The PM was addressing a state-level 'Mahila Saksham Melava' or Empowered Womens Meet of Self Help Groups, organised by the Maharashtra State Rural Livelihood Mission (UMED).

He also inaugurated the 10,000-acre Aurangabad Industrial City (AURIC), the country's first greenfield industrial smart city and part of the upcoming Delhi-Mumbai industrial corridor. The PM said his govt has provided all kinds of assistance to SHGs like subsidy on loan interest, overdraft facility from 'Jan Dhan' bank accounts, and lauded them for playing an important role in ushering in a revolution.

The Centre has decided that every member of SHGs can avail loan up to Rs one lakh under the Micro Units Development and Refinance Agency (Mudra) scheme to help them start businesses. Out of the 20 crore loans distributed under the MUDRA scheme, around 14 crore was given to women, Modi said, adding that out out of the 1.5 crore beneficiaries of the scheme in Maharashtra, a dominant 1.25 crore are women. On the occasion, Modi asked women to create awareness about the triple talaq bill passed recently by his government to protect Muslim women.The prime minister claimed that welfare schemes were nearing completion ahead of their respective deadlines, attributing the feat to dedication and honest intentions.

"India will soon be open defecation free (ODF) and by 2022, we will provide a home to every poor person in the country. As as many have 1.8 crore people have already benefited (from Pradhan Mantri Awas Yojana). We have created homes as per the wish and need of people," he said. The PMAY scheme was being implemented with complete transparency, he added.