FPJ Interview: Just like a bank for money, every village should have an indigenous seed bank, says Padma awardee Rahibai Popere

Felicitated as Beejmata — seed mother, Popere has conserved and preserved more than 150 varieties of indigenous seeds of grains and vegetables in her remote hamlet at the foothills of Sahyadri mountains in Maharashtra.
IANS 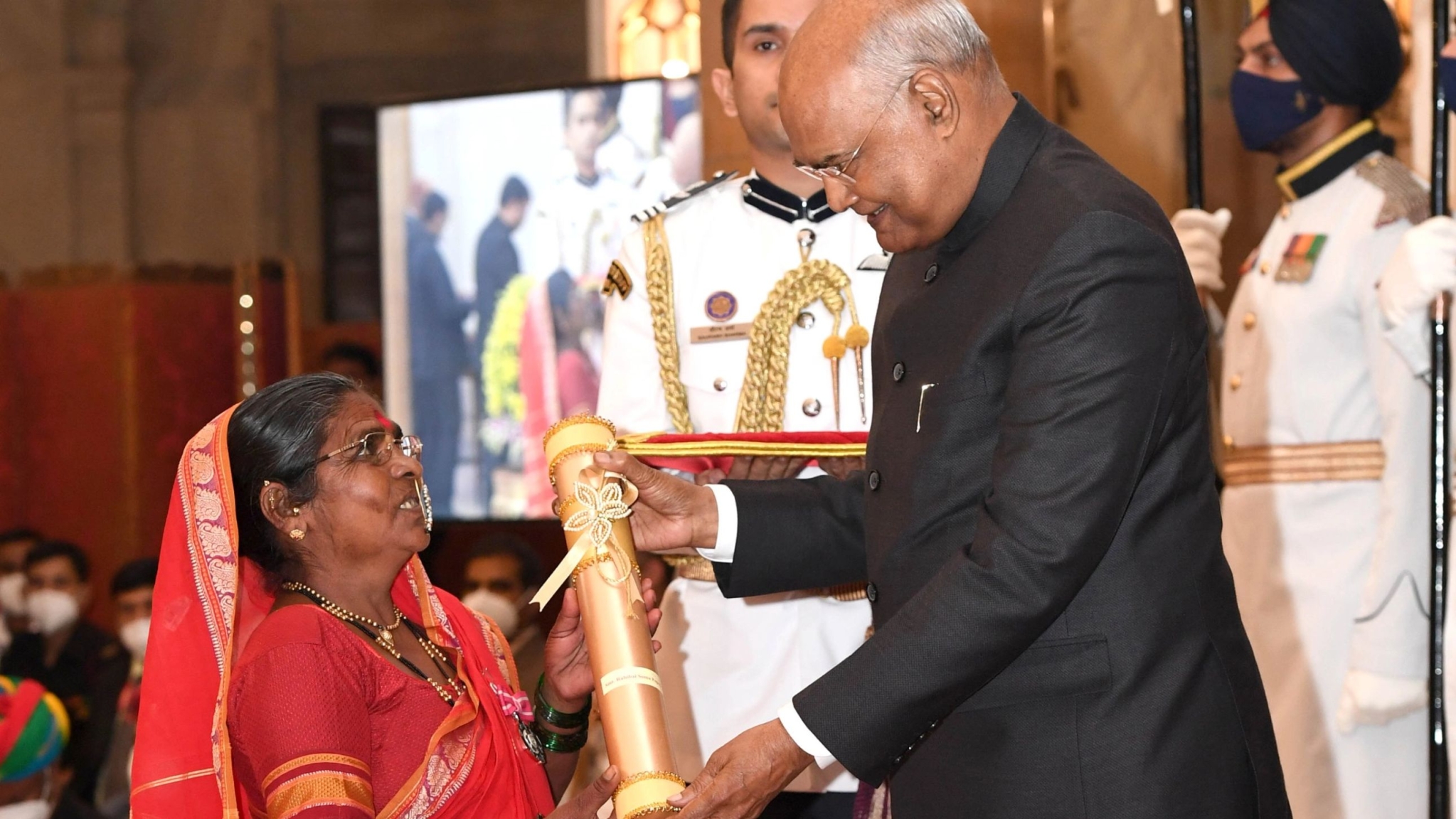 "I don't know how to read or write, how will I label the pots of seeds?"

That she does not know how to read and write did not deter humble Rahibai Popere from doggedly pursuing the immensely important work of creating a seed bank of indigenous seeds with meager resources.

Felicitated as Beejmata -- seed mother, Popere has conserved and preserved more than 150 varieties of indigenous seeds of grains and vegetables in her remote hamlet at the foothills of Sahyadri mountains in Maharashtra.

Popere received the Padma Shri award for 2020 on Monday.

Clad in nine-yard saree and adorning a traditional 'nath', the farmer and seed banker from Kombhalne village in Ahmednagar district of Maharashtra, recalled her journey of over 30-odd years while interacting with IANS here.

"I never went to school. But my father imparted me so much knowledge about farming and seeds... he imbibed in me how and why having our own seeds is so vital," she said.

The Kombhalne village, of about 1,000-odd houses, is situated on a hillock reached by either on foot or through a kuchcha road.

Power for 24x7 is a dream for the villagers and the mobile range is a far-fetched thing.

Popere shines as a perfect example of an empowered woman, who also inspired and helped thousands of women in her neighbourhood.

The seed bank came much later. Her work actually started for herself. Having learnt from her father, the farmer who has three acres of land, said she would sort seeds quality wise.

Her method to store these seeds was and still is a simple, homegrown, traditional method.

The seeds are kept with ash in an earthen pot that is sealed with a paste of cow dung and soil. Sometimes, ash is replaced by a mixture of dried neem leaves and rock salt. "Seeds kept like this can stay undamaged for 10 years," she said.

Over the years, her collection of seeds increased and slowly became what is now known as a 'seed bank'.

Also, her collection of earthen pots has only grown and now she has more than 100s of them. Seeds are taken out as and when needed and the pots are re-sealed.

Popere has 18 varieties of beans, 16 varieties of rice, 30 types of vegetables, including bitter gourd, herbs and a number of medicinal plants among her collection.

Inspired by her work, 3,500 women from her and surrounding villages came together to form Self Help Groups (SHGs) -- all under the umbrella organisation, 'Kalsubai Samvardhan Samiti'. The Samiti also has farmers from 150 villages as members, who all are increasingly turning to organic farming.

One of them, Popere's friend and fellow farmer Mamata Devrao Bhangare from a neighbouring village Devgaon, accompanied her to Delhi.

Bhangare promotes organic farming and is a staunch activist of one of the many SHGs. All of them have seed banks of their own and exchange good seeds from time to time.

What is her dream now? "Each and every farmer should grow more and more indigenous crops, vegetables and fruits. That will not just ensure sustainability but also nutrition for his or her children too," she said, adding, "But more importantly, a farmer need not buy seed. Even if the crop fails for some reason in one year, the seed can be used for up to three years. The farmers will not face ignominy, won't commit suicide."

Almost all villages now have a bank for money. "My dream is that all villages should have seed banks. More and more people should preserve and grow indigenous seeds," the humble farmer asserted.

If possible, the government - that has recognized her effort by awarding her a Padma Shri - should help in this, she said.

She also remembers a timely help by Maharashtra politician Chandrakant Dada Patil, who helped her with a pucca building that is now home to her seed bank and also hosts the regular visitors to stay overnight.

"Our entire region's irrigation is rain-fed. We have no other source of water. Not just for irrigation, otherwise also. So, it becomes a tad difficult to host people in peak summer, when actually more and more people can come," Popere said.

She said she has not asked anything from the government but hints that decent road connectivity should help her entire village.

In fact, when IANS caught up with her a day after the award function, she had not even spoken with her family members back home. "What to do? There is no phone connectivity either?"