Four alleged suicides and three cases of suicide attempts by different families in Nagpur and Palghar within 48 hours has shocked Maharashtra.
Agencies 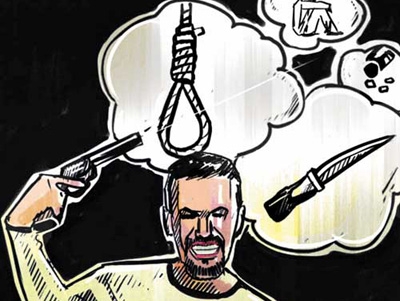 Four alleged suicides and three cases of suicide attempts by different families in Nagpur and Palghar within 48 hours shocked Maharashtra over the weekend, officials said.

In the first instance, late on Friday, a woman made her minor son and daughter eat poison and then consumed it herself over a dispute with her husband for buying a TV set.

According to police, the incident happened on Friday at Wathoda's New Ganesh Nagar when Ayesha Baig (32) gave poison to her six-year old son and 10-month old daughter after a quarrel with her husband Naseem for not buying a TV set for the family.

Ironically, she took the drastic step when her husband, a milkman, had gone to the market to purchase the TV set which was the cause of regular brawls in the family.

Neighbours rushed the woman and the kids to the Government Medical College & Hospital where the infant is reported to be critical, while the Wathoda police have registered an office of attempt to murder against Ayesha.

In the second instance, depressed after his wife left him during lockdown, a 35-year old man allegedly killed his three minor kids and later ended his life at Nalasopara town late on Saturday, police said.

The incident came to light when the bodies of Kailash Parmar, his 12-year son, and two daughters 17 and 13, were found in a pool of blood at their rented home in Babulpada.

As per preliminary probe, the Tulinj Police suspect that the man may have allegedly sedated and then killed his children with a knife.

Later, he tried to hang himself from the ceiling fan with a sari, but failing, he used the same knife to end his life.

His father, Viju Parmar - who found the bodies - informed the police that Kailash, a vegetable seller, was very disturbed since his wife left him nearly two months ago and he was more upset when he saw her photos on social media with some other man.

Tulinj Police have registered a case of murder against Kailash and are making further investigations.