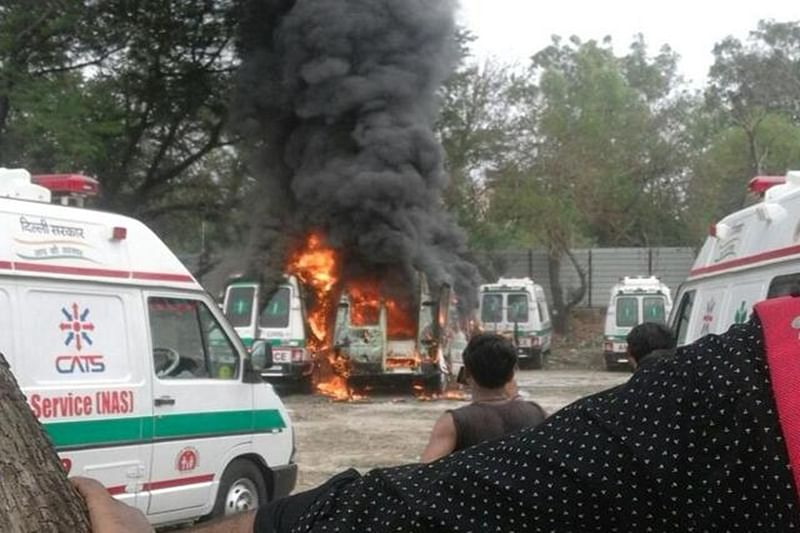 Thane: Four ambulances were gutted in a mystery fire near the ICU ward of the Thane civil hospital on Sunday. The ambulances were meant for ferrying critical patients but hospital sources tried to downplay the incident and claimed the vehicles were not in use and rusting for the last few years. But they had no explanation why the compound outside the ICU ward was being used as a dumping ground for highly inflammable ‘scrap’.

Suddenly, one ambulance caught fire around 4 in the evening; in no time, it had engulfed the other three. In all, five ambulances were parked in the compound, which also serves as an entrance to the ICU ward. Other wards, too, can be accessed from here.

Also Read: Mumbai: MRI section of Nair Hospital was manned by a resident doctor & ward boy during the tragedy

The seriousness of the fire can be gauged from the fact that the toxic fumes reached the second floor of the hospital, causing much anxiety to in-house patients. By the time four fire brigades reached the spot, four ambulances had been gutted. Only one vehicle in the lot remained unscathed. The civil hospital by then had shifted the patients to the other building.  The most shocking aspect of the incident was the discovery that fire extinguishers on the premises were well beyond their expiry date. Thankfully, they were not needed.

“There is no place in the hospital to keep these ambulances. We had written to the Deputy Director’s office several times and sought the shifting of these ambulances. But we drew a blank,” said Dr S.V.V. Makode, additional civil surgeon, Thane civil hospital. Luckily, the incident occurred on a Sunday and the outpatient crowd was less.