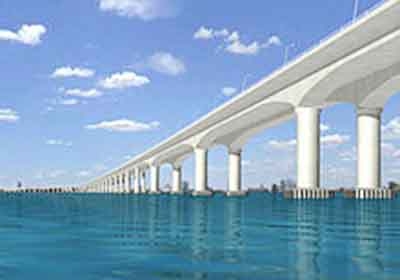 Mumbai : The Mumbai Trans Harbour Link (MTHL) — an ambitious project that has been on the drawing board for over three decades — will finally see the light of day. With a series of meetings underway to chalk out the modalities, Mumbai Metropolitan Region Development Authority (MMRDA) officials said that they are likely to sign the loan agreement with Japanese International Cooperation Agency (JICA) by the year-end.

After yesterday’s meeting between office-bearers of JICA and Chief Minister Devendra Fadnavis, the MMRDA officials met JICA officials on Thursday to discuss the technical aspects and funding of the project. “Talks have been very positive and it is likely that we could sign the loan agreement with JICA by the end of this year,” said a senior MMRDA official.

According to an MMRDA official privy to the details of Thursday’s meeting, MMRDA and JICA officials carried out an overall review of the project. “Along with that, the next step now is that JICA will submit the feasibility report, which will include the social and environmental impact assessment, etc. The reports will be ready soon,” the official said requesting anonymity.

The 22-km sea link, estimated to be constructed at a cost of Rs 11,000 crore, will be India’s longest sea bridge, which will connect the mainland with the hinterland. Connecting Sewree and Nhava, MTHL, when completed, will provide a shorter link to Navi Mumbai, Pune and Goa. According to the MMRDA official, the JICA will cover 80 per cent of the project cost by funding Rs 8,800 crore. The Centre has already approved 20 per cent of the project cost as viability gap funding.  JICA has offered the loan at a 2 per cent interest rate for a period of 30 years, the official added.

The project was first proposed in 1984 and since then has failed three bidding processes. It was being implemented by the Maharashtra State Road Development Corporation and the state government transferred the project implementation to MMRDA. MMRDA tried to implement the project on a public-private partnership (PPP) model, but failed. Now, the project will be executed under the cash contract or engineering, procurement and construction method, expected from JICA. Officials added that JICA may even assist MMRDA on the construction methodology to be adopted.