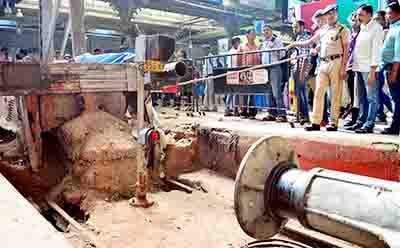 Guard reported to have been driving train, four-member panel set up to probe mishap

Mumbai : In an incident similar to the one on Western Railway in June wherein a train over-sped at Churchgate station crashing into the buffer, an empty Electrical Multiple Unit (EMU) rammed into the buffer at platform no. 5 of CST station on Central Railway (CR) on Tuesday at 2.25am. Though no one was injured, the accident delayed CR services by 20 minutes.

CR sources stated that instead of the motorman driving the train, it was the guard who was behind the wheel which could be a major reason for the mishap as they are not experienced enough to drive a train. The guard has been suspended and after the Minister of Railways ordered an inquiry into the incident, a committee of four senior officers has been set up to investigate the case and give a final report within three weeks.

The enquiry committee will also probe the role of the motorman in the mishap, following which strict action will be taken against him if he is found guilty, sources said.

The EMU rake hit the buffer at the dead-end of the platform when it was being placed there after mandatory checking, the CR stated in a release.

Amitabh Ojha, DRM of CR (Mumbai) said: “While performing the shunting of empty EMU rake at CSTM after examination, at around 2.25am, while backing the rake to the platform the crew dashed the EMU at the dead end buffer at platform no 5. As a result, the front trolley of CST end coach got derailed. There is no question of injuries to passengers as it was a shunting operation and the rake was empty. The track on platform 5 was given fit at 6.55 am and thereafter, the platform became available for service.”

He added that it appears that the crew may have erred in judgement. The Railways will have to bear losses as the train uprooted part of the platform, railing and security grills.