E-challan system to now be used by Navi Mumbai police 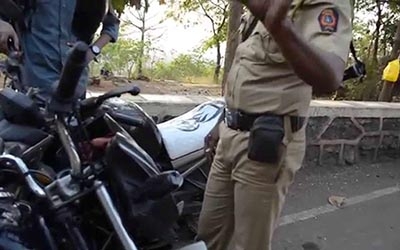 Since the installation of 573 CCTV cameras by the Navi Mumbai Municipal Corporation (NMMC) and the City and Industrial Development Corporation (CIDCO), 14,588 motorists have been served e-challans and Rs 20.79 lakh in fine has been collected. A senior police official said, “The recovery rate of e-challans has been very low. A number of reasons are responsible for the low recovery rate as 10 percent of e-challans were returned due to wrong address provided on the vehicle registration portal. To improve the recovery rate, senior policemen of local police stations were also given the e-challan machines, giving them power to penalise the traffic offender and collect any pending dues.”

The local police were empowered to issue e-challans under Motor Vehicles Act for offences like speeding, helmet-less riding, driving without a seat belt and riding triple seat. However, only traffic police can take action against drunk driving and illegal passenger transportation in private and goods vehicles, said a police source. “This is an impressive move as it will help the already short staffed traffic police department and improve the recovery rate of e-challans. Also, the e-challan system has eliminated the corruption allegations as the entire process is based on transparency,” said Sunil Lokhande, deputy commissioner of police (traffic).