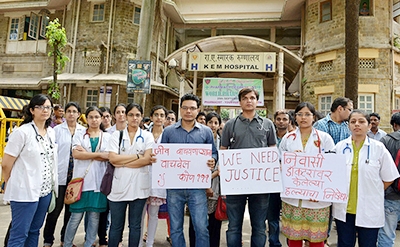 Mumbai : Doctors of 14 medical colleges across Maharashtra along with KEM Central Maharashtra Association of Resident Doctors (MARD) called off its indefinite strike on Sunday after their demands were met including arrest of all the four alleged offenders in the KEM doctors’ assault case. Following this, the doctors’ demand of strengthening of security at the hospital has also been taken into consideration. They have been assured that 145 CCTV cameras will be installed in the hospital by October end and 211 additional security guards will be deployed by November 30 at KEM hospital.

The Bhoiwada police on Sunday arrested all the four accused- Mirajjudin Qureshi (32), Junaid Qureshi (26), Moin Qureshi (55) and Mohammed Qureshi (18) and charged them under various sections of Indian Penal Code including Section 326 (voluntarily causing grievous hurt by dangerous weapons or means) and Section 332 (voluntarily causing hurt to deter public servant from his duty). They also have been booked under the Doctors Protection Act 2010. This has come after three resident doctors were assaulted with iron rods and chairs by angry kin of a three-year-old who died of dengue at the hospital on Friday.

Dr Sagar Mundada, central MARD president said, “We called off our strike as our demands have been met and we have been assured that the security personnels will be increased by 32, 145 CCTV cameras will be installed, 211 additional security guards will be posted and rapid action force has been constituted and hotline number 7402 has been given to all the doctors.”