Devendra Fadnavis meets Nirmala Sitharaman, requests early disbursement of insurance amount for those who suffered damages due to floods in Maharashtra 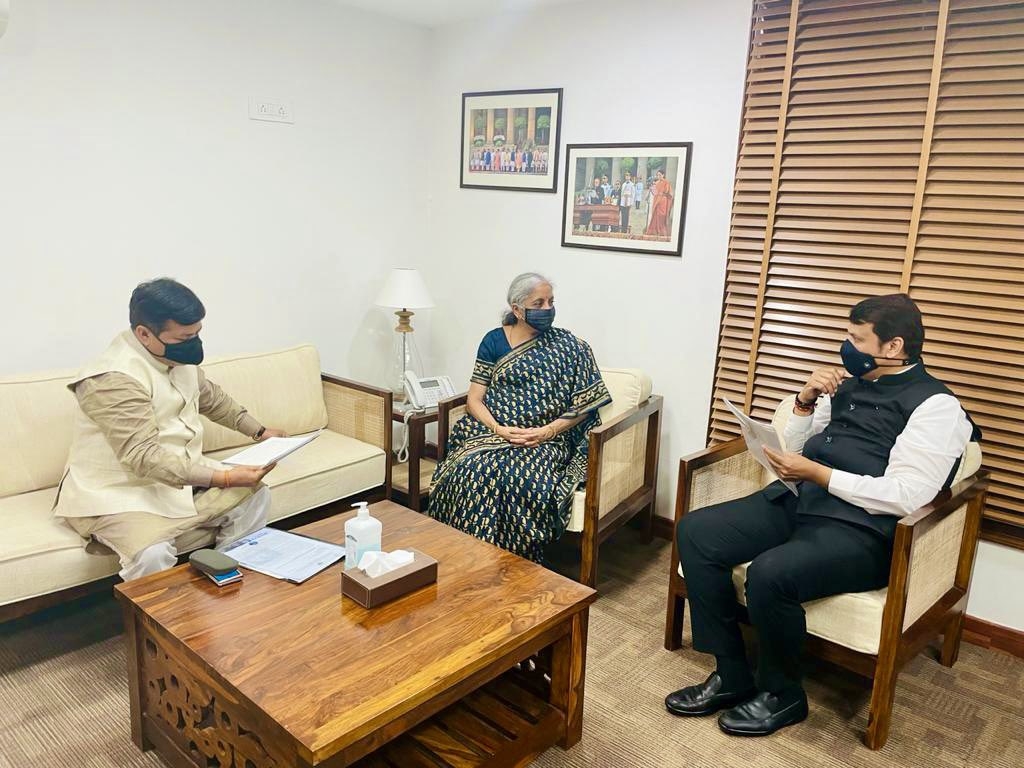 Devendra Fadnavis meets Nirmala Sitharaman, requests early disbursement of insurance amount for those who suffered damages due to floods in Maharashtra | Twitter/@Dev_Fadnavis

Former Maharashtra Chief Minister Devendra Fadnavis on Monday met Union Finance Minister Nirmala Sitharaman in the national capital and requested an early disbursement of insurance amount for those who suffered damages due to floods in the state.

Taking to Twitter, the Leader of Opposition (LoP) in Maharashtra Legislative Assembly wrote: "Met Hon Union Minister @nsitharaman ji in New Delhi to request the early disbursement of insurance amount for those who suffered huge damages due to #MaharashtraFloods in parts of Konkan & Western Maharashtra so that they can get immediate relief & timely assistance."

Fadnavis thanked the Union Finance Minister "for the historic decision of securing deposit of account holders upto ₹5 lakh in case any bank is placed under moratorium". "We’re very happy that bill to this effect too was passed in Parliament. This will greatly help small depositors’ community," he said in a tweet.

"Also requested Hon FM @nsitharaman ji to speed up the process for easing of norms for funding by SEC/DCCBs to Cooperative Housing Societies under self-redevelopment schemes," the Bharatiya Janata Party (BJP) leader said in another tweet.

Pravin Darekar, Leader of Opposition (LoP) in Maharashtra Legislative Council, was also present in the meeting.

Earlier in the day, Fadnavis met Union Home Minister Amit Shah to urge him for the passage of a Constitution amendment Bill, which seeks to restore the states' power to identify backward classes, in the ongoing session of Parliament.

"I requested (Shah) that the bill should be passed in this session. I will urge all political parties, including those who have caused the logjam in Parliament, to support this measure for the OBC welfare and pass the bill unanimously," the BJP leader told reporters in the Parliament complex.

Asked about Maharashtra Chief Minister Uddhav Thackeray's reported call that the current 50 per cent ceiling on quota be removed so that Marathas can be given reservation, Fadnavis accused the Shiv Sena leader of shying away from his responsibility and said his demand and the bill are two completely unrelated issues.

Once passed by Parliament, the Bill will give states the power to identify a backward community so that it can be provided with reservation benefits, he noted.

The bill was necessitated after the Supreme Court had dismissed the Centre's plea seeking a review of its May 5 majority verdict that held that the 102nd Constitution amendment took away the states' power to notify socially and educationally backward classes for the grant of quota in jobs and admissions.

The government is expected to push for the passage of the Constitution (127th Amendment) Bill, 2021, in the House on Tuesday amid expressions of support to it from most parties, including the opposition.