Cyclists take to Mumbai roads, seek their place in sun 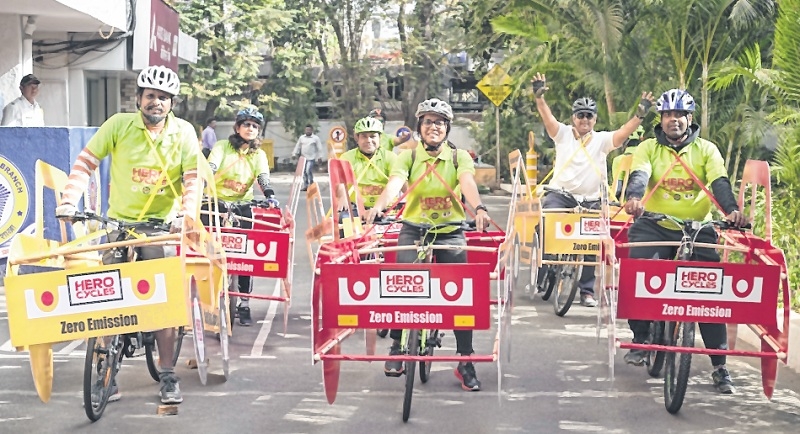 Mumbai: The 30th Road Safety Week undertaken by the Ministry of Road Transport and Highways (MORTH) with the Mumbai Traffic Police (MTP), to promote road safety for motorists and pedestrians, has endorsed cycles as a safe and environment-friendly mode of transport. On Friday, as a part of the awareness programme, Amitesh Kumar, the Joint Commissioner of Police (Traffic), flagged off a campaign with the messages — ‘Share the Road’ and ‘Respect Cyclists’.

As part of the drive, six cyclists, with cardboard car cutouts attached to their bicycles, rode off to deliver the message of road safety and demand equal respect and space for cyclists on the streets. In pairs, they cycled the streets of south Mumbai, western and central suburbs.

The campaign, flagged off from the Mumbai traffic headquarters in Worli, aims to draw public attention to the need for according respect and safe passage to cyclists while promoting the use of bicycles as an environment-friendly and healthy mode of transport.

The cyclists negotiated peak-hour traffic on a working day alongside other motor vehicles, demanding respect The Joint CP (Traffic), Kumar was impressed with the novel idea of car cutouts to spread the message of inclusiveness and respect for the cyclists on our roads.

“Road safety awareness is our biggest concern, with increasing number of cyclists sharing the roads in Mumbai. The traffic police would like to extend its wholehearted support to the Smart Commute Foundation, which came up with this novel idea,” said Kumar.

Traffic divisions across the city are also undertaking special interaction series with autorickshaw drivers and advising them to always safeguard the interest and safety of passengers. They are also conducting special drives to keep traffic flowing smoothly around railway stations, swooping down on 325 traffic violators in Kurla, Ghatkopar and Mulund.