The duo was rescued using a rope and taken aboard the boat, wherein they were taken to the medical centre and attended there.
Staff Reporter The Yellowgate Police of Mumbai division on Sunday rescued two people-- a boy and a girl-- from drowning in the sea in South Mumbai.

The police had received a distress call on at around 11.30 am, upon which they acted and were able to save the two.

The rescued have been taken to the clinic for further medical attention.

According to police sources, the two people-- Vikas Salvi and Nikita Damaniya-- both tourists had gone to sit near the Gateway of India when they both allegedly were swept away by the tides.

The locals and police patrolling vehicle saw the duo drowning and made a distress call to the police, who immediately contacted the south control room and a rescue boat was sent to the spot.

The duo was rescued using a rope and taken aboard the boat, wherein they were taken to the medical centre and attended there. 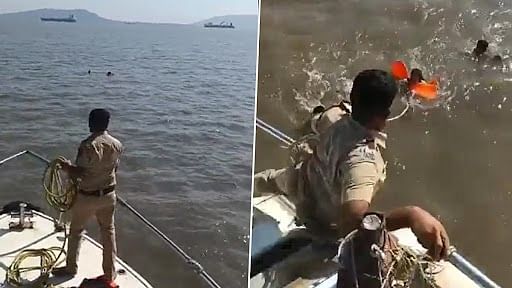