Mumbai : After denying permission to as many as 14 Muslim religious organisations, the Mumbai police finally allowed the Sunni-Dawat-e-Islamia (SDI) to hold an Ijtema (annual gathering) at Azad Maidan from Friday to Sunday.

After the August 11 Azad Maidan riots, in which two people died and 63 were injured, many moderate Muslim organisations were denied police permission for peaceful gatherings, protests and conferences. 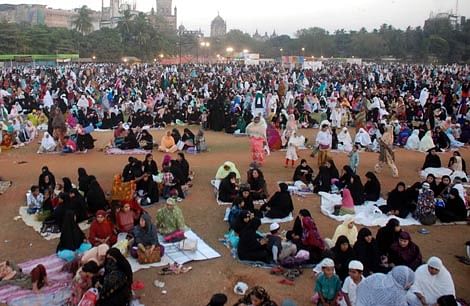 But SDI (Muslims from the Barelvi sect) were granted permission some two weeks back on the condition that the CCTV cameras, volunteers, metal detectors in large numbers would be arranged by the organisers.

Also the organisers were asked to give a letter in writing that they would be held responsible for any mischief or riot, said a police source.

Mohammed Javed, the spokesperson for SDI, said, “This is the 22nd annual gathering of SDI in Azad Maidan and in last 22 years there has not been a single incident of violence in our programme. This was the reason we got the permission easily from Mumbai police.” However, Javed denied about any letter in writing being given to the police.

“In our programme, around three lakh rotating crowds which include women and children come in three days. Looking at the circumstances we had increased the number of volunteers and CCTV cameras too”, said Javed.

Additional Commissioner (south region), Krishna Prakash had asked the SDI organisers to locate 32 CCTV cameras, with metal detectors and 300 volunteers to help the police. However, the SDI had recruited 1,200 volunteers, also professional bouncers, to keep a close watch on every section of the Azad Maidan. “As per our prior experience at one time around 35,000 people gather in the ground where they listen to various preachers who come to India from various parts of the world”, added Javed.

“650 police officers, 5 ORTs, 3 SRP platoons had already been assigned at the Azad Maidan on Friday which is the first day of gathering. Also 100 officers, dressed in civil clothes, will be present in and around the ground looking at the law and order during the gathering”, said Prakash.

Apart from the gathering, which is held till 9 pm in the night, there will be a tight security in the night too after the programme is over, added Prakash.

The police had refused permissions to Dr Zakir Naik, a renowned religious speaker, to hold his annual peace conference in December at Somaiya ground, Chembur. A conference, organised by Jamat-e-Islami’s Mumbai wing, a protest organised by Aman Committee against the blasphemous film against the Prophet ‘Innocence of Muslims’, a peace march called Yaum-e-Quds to protest against the Israeli occupation of Palestine, and several other conferences were denied permission by the police.